tderz: The question arises when to remove the white stone.
Often it is told that an immediate removal is honte. 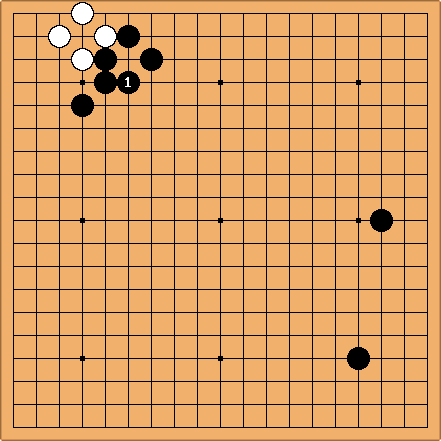 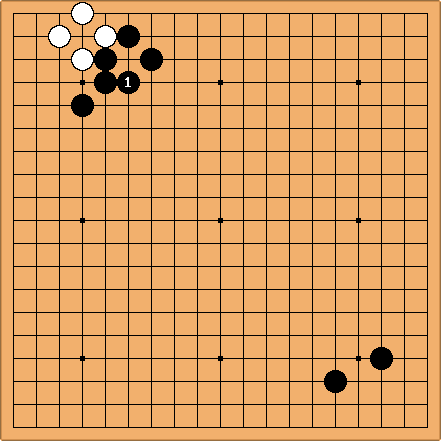 here is also honte.
(but it is much less honte than in the position above)

Bob McGuigan: I think capturing is called the proper move because it eliminates the possibility of White playing a ladder break, maybe not immediately but at some later time.

tderz Exactly, that's right! And the aji of such a ladder break is less important in a safer 3-4 shimari position
then in an extension or moyo involving 4-4.

I wanted to convey that point which I learned in Beijing from Cao Dayuan last year. I was playing a horrible game (means 'I lost') with a Chinese 2-4dan while Dayuan xiansheng was occasionally dropping in, overviewing the game. Afterwards my amateur opponent said (about me) 'He is playing benshou? a lot.' Dayuan xiansheng disagreed and explained the difference.

(The position is very much simplified, I wanted to boil down the teaching content)

Bill: There may be a prescriptive/descriptive question here. IOW, is honte always a good play? I do not have any reference to hand, but I think not always. I recall a comment something like, "It's hard to beat someone who keeps playing honte." But it was in the context of just having done so, and, as I recall, it was because the overall effect of the honte was slow development.

Bill, that's a good example of yours: honte or any other standard 'good' development may not be fast enough. I think many Korean games show this development where e.g. Josekis are halted for several moves in one corner , only to set up another position in another area.