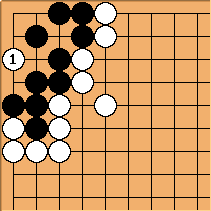 Fighting the last half-point ko I made a ko-threat. I am sure that any player of IGS 1k* level can solve this in 95% of cases, but my opponent decided that I was bluffing. Perhaps, he felt that he was losing by a small margin. He connected the ko and resigned several moves later.

This can be a problem of double digit kyu players. What White is going to do if Black plays tenuki.

After more than a year at

http://www.goproblems.com the level of this problem is very well established. It is 18 kyu.

So how does White kill if Black doesn't respond? 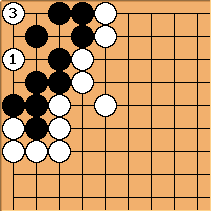 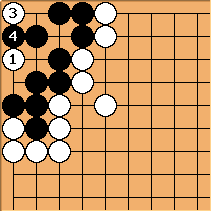 is not the way.

Rather, the question is not really about how to kill. 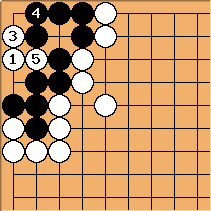 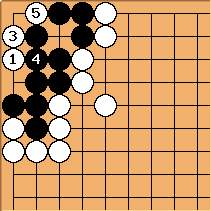 opens up a super big ko, and the black group may die.

HolIgor: The solution posted by unkx80 is correct. In the game black chose to fight ko to find out that there were no ko-threats large enough on the board, while white could be satisfied with a small gain of order of 5 points or so. Black resigned soon.

unkx80: I noticed that Andre Engels has posted this very problem onto

HolIgor: Thanks to Andre. I am too lazy to post anything there myself and he submitted the problem with the reference to SL.

About the difference in counting. Though I was taught go with Japanese rules it seems to me that awarding points in seki is fair. Especially in the case of internet go. The Japanese rules would create a dispute here. IGS counts such points, so to be true to the rules black would have to fill in the point. But then the group is dead. So, white would have to promise not to remove the group from the board. In the situation when your opponent most likely does not speak English this becomes difficult. At the same time this point could be separating a win from a loss.

Cgoban, on the other hand does not count such points. So, if you use cgoban you local score can be different form the server score. Your client may shown you a win and the server may decide that you lost.

Since cgoban is the only client for KGS, no such problems there.

Chinese rules would be better in this case.