HolIgor struggles with the high extension

This is a kind of joseki I played a lot and thus accumulated some knowledge. I tried different continuations including tenuki at every opportunity. 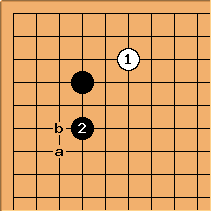 This is the beginning of the joseki. White approaches a hoshi stone with the usual

At this moment Black faces a usual dilemma: is it better to let White into the corner and get the upper side, or to extend along the left side. If the decision is in favour of extension another usual dilemma is which of the points (a, b or

to choose). Of course, one has to have the idea about the consequences of each of the moves.

does not build a strong and thick group. But it claims a larger sphere of influence and keeps an option of a counter attack while a move at b, for example would be played in order to create a small and robust group (small territory but thick). 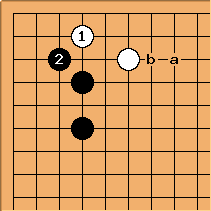 White has several good continuations here. I will consider only this slide.

I was never completely satisfied with

(I used to hate it) as it was extremely slow. I tried a and b. They are good moves too, sometimes I was content with the result, sometimes not. I played tenuki as well.

It is important to remember that all these options exist and

is not a must. But after all

is a good move. It allows Black to live in the corner, in case of emergency. This is its raison d'etre. It is played not to gain the territory (though there are some prospects of getting territory here). It is played to get a base.

But at the same time in many professional games

is not played. Black waits for the development in other regions to decide what approach is better here. 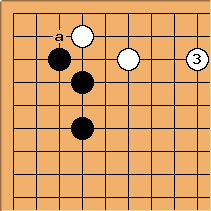 White has a good shape after

I could not attack this formation. If I played a, my opponent extended along the top or jumped out. If pressed from the top she played a. In the later case Black has no cut, nor anything else. I had to learn to endure it. 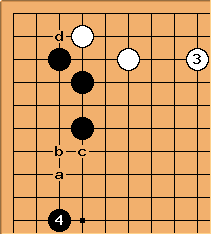 This is a good move. But it should be understood correctly. 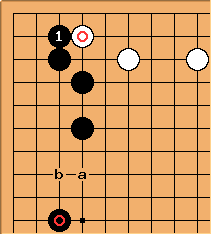 This move is very big.

It gives Black sure life while making White seek life elsewhere (i.e., not in the corner), it takes territory, it makes White's invasion on the left side even more dangerous. Why not play it as soon as possible? The answer is that it is not sente. White's group at the top is not under immediate danger after this move. White can play a good extension at the top, or even tenuki. So, when?

One option is to wait until you have stones at the upper side that limit White's extension and jumping out for White is not very good (the influence is balanced by other black stones). In this case

can be sente and it is a move that is pleasant to play.

And of course, if the opponent invaded and cut off

then her own move at this point would be a very secure attack. This happens quite often in actual play.

and connection somewhere in the region of a or b are miai with respect to getting a living group.

Q: if white is going to answer

locally, what is white's best continuation if white refuses to give up 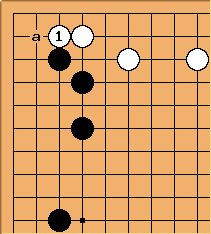 happens quite often in the game. Especially when development at the top makes White's three stones look lonely and weak.

Then White has to remember that Black's move here might become sente. It would be a pleasure for Black to take the corner completely in sente.

can have another purpose: preparation for the invasion at the gap. Therefore, Black should react depending on the circumstances.

If White scrambles for life a can be an option. White is too busy at the moment, and a possible continuation can be like in the next diagram. 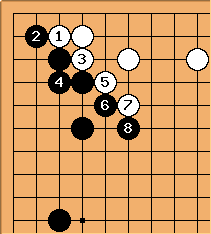 Now White can forget about the invasion. Black has a solid chunk of territory.

If White prepares the invasion, it is better to protect against it. In any case, Black has to remember that replying with

in the diagram creates a weak point which might be exploited by the invading side.

What to do next 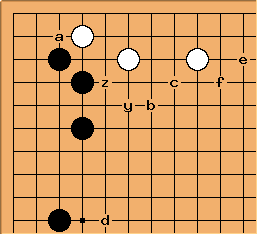 I have talked a little bit about a which is a big solid move, but gote. The same is true about any other move in this basic situation. The joseki stopped at this point and the reason for it is that no move is forcing.

Now, I do not claim that what I am going to say is true. I rather give my impressions about the moves.

I like to play b in this situation. I don't know if actually that is a good move. The idea is that a move on the boundary between spheres of influence is generally good as it adds something to your sphere and takes something from the opponent's (see focal plays). Playing at z could be an option but I remember a proverb that says that the sake bottle is negative. I don't know if the proverb applies here, but the "correct" shape after b is all right, so I play it. The sad thing is that White is not forced to reply at this moment. 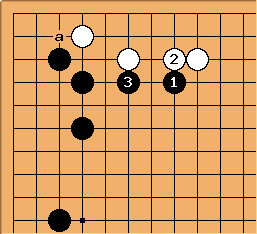 At c is another idea. Again, Black ends in gote, White is strengthened; Black's wall is thin, but actually White's expansion here is now limited.

I began to appreciate moves like this quite recently at the level of IGS 5k. It seemed to me that this was horrible aji keshi, but slowly realized that there is not much aji in this position. Now I think that it is making stronger an opponent's group that is strong already.

This approach should not be applied in positions where White's group could be attacked and where a move at a can become sente. If in that case White has to seek life, Black can strengthen himself and convert his larger framework on the left side into a solid territory.

To be continued. Further topics include rebutting possible invasions, what to do next and how stable this formation is with respect to tenuki.