Hane At The Head Of One And AHalf/ Discussion

Alex Weldon: This page caught my attention because I'm interested in bad habits and the reasons behind them (as I've mentioned elsewhere, I'm currently in the research and planning stage of a book about breaking them).

Anyway, you're right about this being a fairly common mistake - I see it not uncommonly. Also, your idea about where it comes from is probably more-or-less correct as well. For it to become a habit, though, it needs to be reinforced. I wonder what the most common continuation is. Obviously, the cut is the most severe, but beginners are timid about cutting, because it gets complicated.

Timid pseudo-logic would suggest W at x to prevent "two at the foot of the hane", allowing B to protect his cutting point and thereby get a good result. Could this be the result that B is expecting? Or maybe W b and B c leading to a symmetric result? If his opponents play these moves more often than cutting, that could be what leads B to believe his play is good.

Dan: I expect that it often "works" at the beginner level because, as you say, White is often afraid to cut.

When I suffered from this problem, I didn't even need positive reinforcement to want to play this move; it just had the look of good shape to me (based on bad analogies with haneing at the head of two), and if I ended up with a bad result, my first assumption was to blame it on my followup - surely my initial "good shape" move couldn't be at fault! My main hope with this page is to get beginners to glance at the first diagram and feel sad instead of happy.

Alex Weldon: Surely pattern recognition would then kick in at some point. I don't think it's bad for your learning curve to play moves that you think look like good shape, even if they turn out not to be. Takemiya (I think) said that it's important to "play moves that please you." The idea being that if they aren't good, then after they lead to getting yourself in trouble ten or twenty times in a row, they won't feel so good anymore. The problem arises when wrong moves get consistently good results because of weak opponents. If you've had positive reinforcement 200 times, you'll need to be punished many more times before unlearning the habit.

Zarlan: Ah, yes. It is a not so uncommon, and very weak shape. Not uncommon, my games included... (I'm dubble digit BTW) Well, at least I do realize that it is very weak, and fighting is my primary weakness. I don't realy like playing it, yet I still play it (so as to block my opponent). I guess I'd better try too avoid playing it.

Calvin: This is a more common move in pro games than you might think, especially in situations where it's important to try to seal in the stones, or when the crosscut fight would be okay. 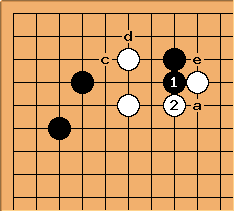 Here's an example from joseki. Here, in response to

is a fine move. White would not passively extend at a. (There is also a variation where if black makes the exchange of c for d before playing

, white can descend at e instead of playing

, but that's another topic.) 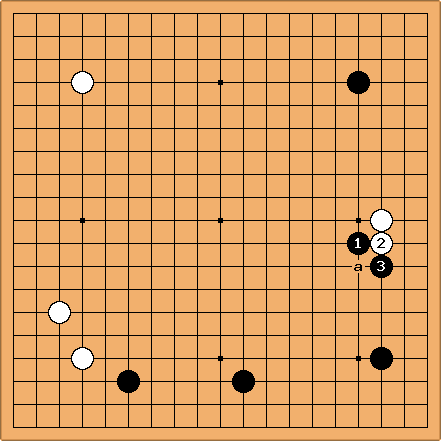 Here's another example from a common development of the mini-chinese opening. Black plays the hane at

, and usually white will not cut at a immediately (although she may do so eventually, but presumablely black is okay with this fight.)

Bill: BTW, both of these examples are properly called blocks. Not that they are not hane, but block is more informative.

Calvin: I like that. The question: "why hane?" is often answered by "to get ahead." A hane to get ahead is perhaps a different idea than the block.