This position is taken from the fourth game of the 11th Tianyuan title match between Ma Xiaochun (White) and Chang Hao (Black). The game was played on March 9, 1997 and is featured in Go World 80, page 47. 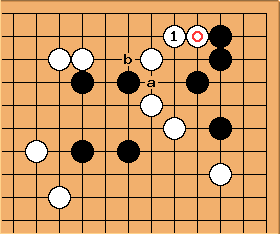 from being captured. Against these three virtues, there are few drawbacks, compared to other defenses. 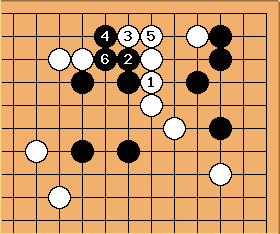 If White simply connects, Black can (perhaps not immediately) cut the two groups. 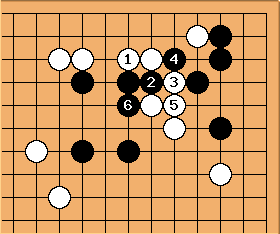 If White defends here, he will be cut.

Iago: just wondering what your think about 1... cannot find a refutation 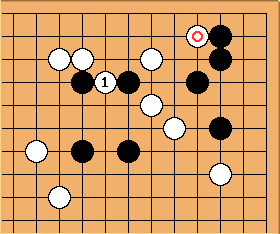 This seems to be better in the center, but maybe it doesnt compensate for the loss of 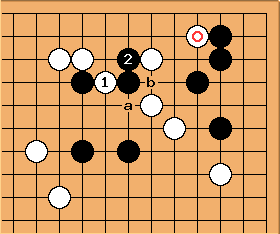 ? Sort of making a and b miai. 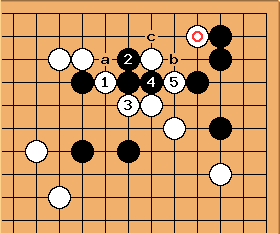 Iago: Yes seems like a good refutation thanks... do you think that the gain in the center could be worth the exchange on the side this way ? because black was trying to reduce a moyo here.

depends on the rest of the board i guess... could be interesting to have a look at the whole game at this stage.

seems to me that black still need a move at a, b, or c... and will probably finish in gote. (maybe i am missing something with this move ?) 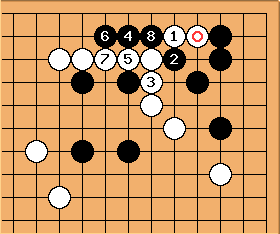 unkx80: On the other hand, I have a question. Doesn't

allow Black to have the opportunity to play

mafutrct: Might be, but this kind of kills the center, so black will have to wait for a long time to play this.