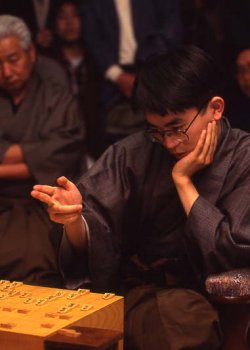 Habu Yoshiharu (羽生善治, born September 27, 1970), considered by many to be the strongest Shogi player in the world, for any period of time, also has an interest in other mind games, including Chess and Go.

Starting in 1989, he began taking title after title in the professional Shogi world. Many of the titles, such as the NHK Cup, Meijin, Kisei, and Oza, are familiar to Go players, although they are actually common to both games. He is the only player to have ever won the seven most prestigious titles successively (1996) and he has an outstanding record of 74% of victories over the entire span of his career.

As of 2002, Habu had already attained an International Master norm in Chess from the FIDE, despite having only recently learned the game, and playing only casually against a small group of Japanese players.

He is also a fairly proficient Go player. GoBase.org features a game between Kato Masao and Habu at 6 stones, which was won by Kato Masao.