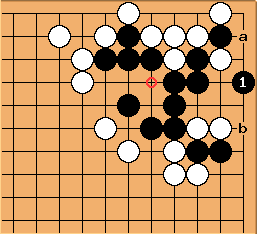 Black has one eye at the circled point.

makes miai of the capture at a and the connection underneath at b, capturing two stones. 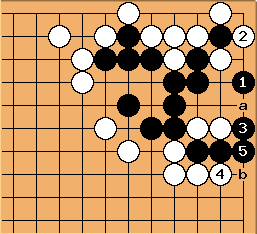 After the connection underneath, White can't give atari at a.

Black makes a second eye with

, and two points there. White can play neither at a nor at b because of shortage of liberties.

White makes four points capturing the stones, and one point at the circled points (Black has to throw in a stone to prevent an eye).
The difference between the two variations is (5 - 2) - (7 - 4) = 0. So White can decide her answer according to the global position.

Bill: On the assumption that

in the Variation 2 diagram is White territory, I calculate that the capture on the side is 2/3 point better for White.

The vulgar atari of

is a painful mistake. It's a so-called anti-suji, missing completely the proper line of play.

and the connection underneath at a doesn't work any more. White must not play anti-suji with

at b, for Black will descend to c and make the connection work again.

loses points. There is no need for Black to lose the stone at

I don't see why not.

I think it is also possible to descend in the corner first, might lose a point though.

White 2 at a gives white the other direction. (black d at 6)

What if white takes the point? 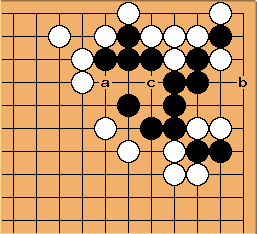 Isn't it also possible to add a before going on with b (solution)? It would threaten to live with c...

grolich: Although the problem is "black to live", the correct solution will be the best way to live, not just ANY way to live. If black threatens to live with a in the diagram white would just capture the corner stone. This also naturally captures the two black stones below, as no more tricks remain, and black is forced to live. white captured 3 stones instead of black capturing two in one line or one in another. That's quite a big difference. Big loss on black's part.

noobish?: Furthermore, the best solution should preserve ko threats. So for example, starting with any of the throw-ins on the top line and then continuing with the correct sequence should not be considered an alternate solution. In general, any sequence beginning with unnecessary forcing moves is inferior to the more direct approach.