Andrew Grant: The following diagram appears in the Appendix of Go for Beginners by Iwamoto. 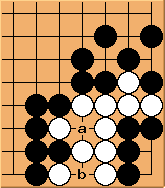 It is given as an example of triple ko, with Black to play. The assumption is that Black must take one of the kos at a or b. But... 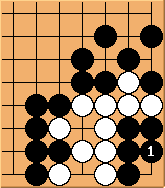 In fact Black need only play here to kill with a bulky five. The kos become irrelevant. White is dead.

I only have the 1972 Ishi Press edition, can anyone confirm whether or not this error was corrected in later editions?

Chris Dams: I have a Dutch translation of this edition (title: "Go"), but in the appendix this diagram does not appear. Instead a bent-four in the corner, a ko that should be connected at the end of the game and a double ko-seki are shown. 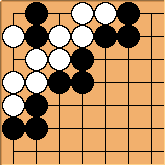 Another erratum in this Dutch edition (if somebody knows if this also occurs in the English edition, please edit) is at the end of chapter three. In a few diagrams showing sekis, points are counted in the seki while at the same time the appendix about rules mentions (correctly) that no points are to be counted in a seki. The text says about this diagram (translating from Dutch to English): "In the seki of diagram 3.71 White has one territorial point and Black has none." 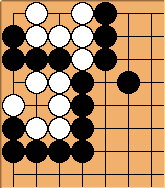 The Ducth edition continues by saying: "Also in diagram 3.74" something like that occurs (White has two territorial points and Black none)." 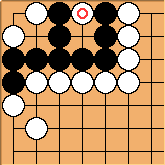 It then continues by stating: "In the seki in diagram 3.72 things are a little different. At the end of the game the isolated marked stone is removed from the board. This is justified by the fact that Black could capture it at any moment without danger for his seki-position. Hence, in this seki Black has three points against one for White". Note that not only the counting of points in a seki is wrong in this case but also the rule that at the end of the game stones are only to be removed from territory is violated. As there is no territory in the seki, the marked white stone should have been captured during play. 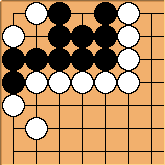 Huh. I'm confuzled. Isn't it true that black could indeed capture W here with no threat to himself? So the addition of one point for the capture of W is actually correct. But it's a situational observation here, not a rule.

Chris: Yes, capturing the white stone is correct. What would be incorrect is removing it after two passes. If it is meant as a situational observation (which I doubt, by the way) then it is still not wise to say it this way because it is all too easy for beginners to conclude that the lone white stone is to be removed alongside together with the other dead stones. IMO it would be okay for a beginner book not to mention this kind of fine print in the rules, but if it chooses to, it should get it right. Another thing to note is that the book came out before 1989, so before the current Japanese rules were published. I am not sure what would have been correct before 1989. The remark that I made serves the purpose of preventing giving incorrect ideas to the readers of this page.