Fhayashi - anyone know the basis for the Japanese term? The word means 'sandals', and the two two-stone groups do resemble the thongs on the top of a pair of geta...

exswoo- You just answered your own question :)

JG - Kageyama gives the same definition as his private etymology in his book LessonsInTheFundamentalsOfGo.

Fhayashi - I guess it would be unnecessarily complex to use the term 'sandal' instead of 'net'... Imagine the confusion - " 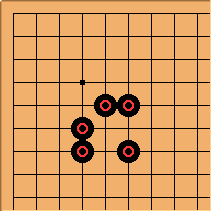 I believe it's the shape, in relation to the old wooden shoes or clogs used in Japan (by women, mainly) with high wooden pieces underneath, to keep the sole out of the mud.

John F. People looking for the meaning of geta are looking in the wrong place, methinks.

The original term was ashida, which means high clogs, or rain clogs. It was the "high" bit that was relevant because the point about the move was that it was as far away (as "high") as possible from the stone to be captured. Ashida was used metaphorically in this way in other words in old non-go Japanese (e.g. ashida-gura).

Clearly the go term was seen as a bit woolly, and variants came in. The evolution has to be speculative, but it seems as if geta started to be used either as a synonym or to refer to a block not quite so far away. But then some people felt that the distinction was getting murky and even introduced the tautological taka-ashida (high ashida). There was also a kata-ashida (offset ashida). But ashida, in real life as in go, is now an old timer's word and young geta has taken over completely - 'twas ever thus! It seems safe to say there was never any element of TT shape imitation in the term and modern attempts to find one are just folk etymology. Old Japanese also used the ancient Chinese word men ({close} the door), but read it hakasu. The old (as opposed to ancient) Chinese used long, meaning {put in} a cage. Maybe cage is better than net? It seems more plausible to talk about locking a cage than casting a net when talking about playing one stone.

DougRidgway This is quite interesting, particularly in how the Japanese terms have changed over time. As an example of usage, which you would be much better placed to interpret than me, my Chinese edition of the Fujisawa Tesuji Dictionary has on p.220 diagrams which look quite similar to Net example 1, Net Example 2, and the a points in Net Example 1, which are labelled 門 (men), 大門 (da men), and 飛 掛 (fei gua) respectively. (I hope I got the characters and pinyin right!) Chinese go terms gives another word, 枷 (jia).

John F. Men and damen are still used, and always have been. One space away it is also called hang men; damen is normally for two spaces away. Jia is a cangue and it too comes in a big variety dajia. It means geta, too, and is a Qing term. To be more precise, the other term long I mentioned above is used in phrases such as longbi and longzhao (to force into or catch in a basket). It appears in texts such as the Peach-Blossom Well Manual. Feigua is nothing to do with geta - in this case (without checking) I think it's just translaterese for keimagake (knight's move press) - gua is normally used for kakari. I infer from this and the characters that you have the Taiwanese edition. You may need to be aware that this translation is not 100% consistent in its treatment of the Japanese terms. That is not a criticism, since the tesujis are classed by function not terminology. But Taiwanese terms are not always the same as on mainland China either. They have a preference for old forms.