JoazBanbeck Most of us have by now observed the problem of inconsistency in our game. An inevitable side effect of discussing it move-by-move is that we end up playing it move-by-move. But each of us, if were we playing alone, would not do such a thing. We would plan first, then move.

I have no solid idea of how such a discussion should proceed, so I'm just tossing out my thoughts. Maybe there should be a 'goals' diagram with every move, updated after each one of MW's moves. Or maybe we keep it here, ungrading every 4-5 moves.

Dusk Eagle I don't come up with long-term goals (other than to maximize my chance of winning) while I play, so I don't know how much I can contribute here. I try to play what I think is best. Obviously my own style creeps into my play, especially when evaluating positions to decide which route to take, but I don't consciously notice it (though others might).

Do you have any non-obvious goals you try to stick to when you play, Joaz?

JoazBanbeck I wouldn't call them non-obvious; I'd call them non-stated. I think that we all have unstated assumptions about the board. Some like 'corners before center' are common to all of us and so we have no problems when someone poses an enthymeme based on it. Others like 'we want to kill F14, and not let it connect' are not so obvious and may have to be stated.

Dusk Eagle Well, I want to keep his groups weak, separated, and on the run. At move 30 right now, I think our groups are stronger than his at the moment (and there's less of them), and as long as our groups remain strong and his weak I don't think he'll be able to make any significant territory/profit.

JoazBanbeck I get the feeling that this is rapidly going to become dated. I may delete it or move it to the bottom of the page. Any opinions? 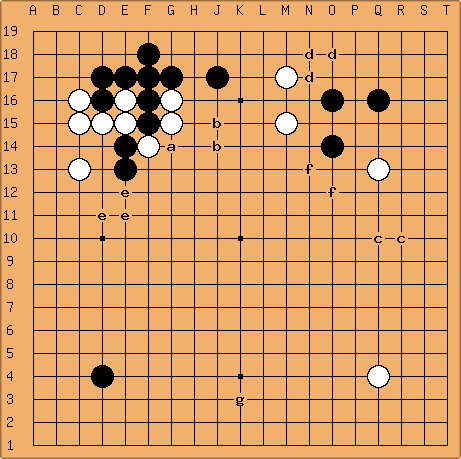 JoazBanbeck Moves around 'a' - capturing F14 - are big. They will probably decrease in value as group 'e' grows and eventually lives on its own. Unless it grows and does not get eyes, in which case capturing F14 is huge.

Moves around 'b' are also big, especially if we can get 'd'. It is sente.

Moves around 'c' are big.

Something around 'e' is essential in the near future. I would go so far as to say that if we were to lose group E without compensation, we've lost the game.

Something around 'f' is the proper direction for that group.

Move 'g' is the biggest open spot, but gote, of course.