A cycle in which one player passes less often is foolish on the part of that player if the rules in force do not effectively charge (at least)[3] one point for each pass[1]. E.g. it is futile to persist in two for one under Japanese rules, because as soon as the prisoner pile grows large enough, its owner can give up the whole board and nevertheless win. 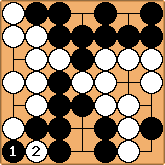 If passes additionally lift the ko ban, Black wins by repeatedly trading two for three. White can only hope for another fool: the rules designer.[2]

[1] AGA rules use pass stones to charge the player who passes; area scoring also effectively charges the passer in the sense that they fail to expand their area by at least one point.

RP: Until someone finds a two-pass attack, let's look at the other case. The Spight Rules also deny White her cyclic defense in case passes are charged, which is foolish. If she does not prevent him to finish the rest of the board, why wouldn't we count it as soon he signals to be thru?

Bill: I don't understand your comment. Ing has already found a two pass attack, which is the main reason why his rules require four passes.

RP: After having created my own 2-pass attack example (see repeated-pass rule), I'd nevertheless like to see Ing's example: Where do I find it?

Bill: You don't have to consult Ing. Moonshine Life by rules that end play with two passes is an example. Also, a forced pass is not a signal that the player wants to stop or end play.

RP: Are you missing something? It's a cycle in which the driving player passes twice, not once as in the second example above. Since neither moonshine life nor, as I fear, the held-back Ing example give me that, I had to confuse the topology to create an example (the second one on repeated-pass rule, which might be a first). It refutes your claim that Spight rules always punish the fool. Further, the repeated pass certainly is such a signal.

Bill: Well, two pass attack is ambiguous. Both Ing and Spight rules allow a two pass attack in one sense, because two consecutive passes do not end play. The first passer can continue. As for Spight rules, I make no claim that they punish anything. Furthermore, I think that your characterization of any go rules designer as a fool is uncalled for. And not only do Spight rules take a repeated pass by the same player in the same position as a signal to end play, that pass does end play. :) You believe that you have found a superior way to handle certain anomalous positions. From what you have said, I do not agree. You claim that Spight rules have a blind spot for certain sequences that, as far as I can tell, no rules but yours allow.

RP: Come on, what else did your initial remark mean? And, I wouldn't mind to be outstandig (smile), but don't AGA rules also let the two for three survive? (They ban the ko recapture after a double pass.)

[3] RP: It can not be more than one point if both players use the same number of moves (pass or play) and each move uses one stone. Any phase of any rule set can be adjusted to do so, only how much of the pass stone is captured varies. By the way, the first sentence is not what I originally had here.

RP: To forestall Herman's remove request: No, I don't think this page should be removed. This is how hypertext should be. BTW, read Bill at the bottom of Count — what would he say about Cycle? Actually we could now delete parts of two for one or put them here — and that might not be the only foolish cycle.

P.J.T. 2019-01-26: I do not agree that hypertext should be highly fragmented into many small pages; what works for the (majority of) the community matters. I think that very small pages can be useful when they provide a clear link target for definitions of terms, but I would much rather have a single large page for exposition of a complex topic than have to click my way back and forth between fragments. Perhaps my memory is not what it should be, but I find it harder to remember what all the little bits say and think how they add up than to absorb them when they are all on one page, as long as they belong together of course. But this discussion really belongs somewhere else!
P.J.T. 2019-03-14: I have since (2019-01-30) created a Definition Template for this purpose, including a motivation for its use.

Bill: When hypertext was first proposed, in the 1940s or whenever, the idea was that, since any page can link to any other page, each page should be able to stand alone. And the only practical way to do that, in general, was for each page to link to definitions or other explanatory material which might be used by other pages. I.e., hypertext was meant for a network structure, rather than a linear structure. In the 1950s I actually read books that were written in hypertext, with links to other pages at the bottom of each page, go to page x or page y. :) But with to the ability of HTML to link to sections of a page from anywhere, there is no particular reason to cut up the natural flow of a page in order to make standalone sections. :)

RP: What for do we have path pages? If we tear apart the cycle page, we'll get safe links more naturally than with anchors and as many "natural flows" as we want. I neither want to have all rules beasts on one page.

P.J.T. I think that this sort of proposed terminology can definitely be useful, but should always be indicated as such, with who proposed it and when. If it becomes broadly accepted or locally (here on SL), that might change.

Robert Pauli: So, let me declare, that I proposed it.