I've discovered that when I teach beginning players how to play the game I always try to come up with an analogy that they understand in real life and try to apply it in the game.

For instance when a new player dies in gote we all know that's bad. It was already dead, and after the play it's still dead. It's a wasted move. The analogy I give to the new player is this. If you were losing money on a particular stock in the stock market. Would you buy some more of that stock before writing it off as a loss? Or would you stop as soon as you knew it was a loser?

If you have to alternate taking one coin off of the stack of your choice, it's pretty clear how to take the coins, even if there is a little bit of variation. You take the biggest point first, of course! You should do the same in your game as well. If your opponent wants to only take from one stack, then you get the optimal coin distribution in the end.

MattNoonan: Or maybe we should treat the two 25 cent plays as miai and grab the 10 cent play?

Joe Seki Very good!! There are three 10 cent coins to grab, and the first one to grab it in sente has the advantage. Thus a small play is actually the winning play. Interestingly enough if one 25 cent play is taken, the other must be taken as well, or you fall behind. Thus if you go first you can take the 25 cent safely because the 10 cent will still be sente for you when it's your turn to take again. But that's probably not always the case, especially if the value of stacks change when you take a coin.

So what if we looked at the game of Go with that analogy? Assign value points to a move, and assign follow up moves associated with it.

Of course, the value of a move probably should depend on who takes it first. Denying points to your opponent might be the true value of a move while it doesn't gain you much profit at all. Life and death is like that, I suppose. 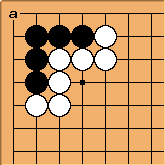 Black gains two points by living, but he has to take the two-point value move to live, just to deny White from getting a 15 point move.

Furthermore, a single move can change the value of subsequent moves.

If Black takes the above two-point move and gets a living shape, White might be able to add a stone that threatens the Black group again. 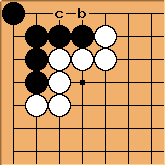 For Black to play point b next is only worth one point, and Black's alive at it stands, so Black should take a bigger point somewhere else on the board. For White, though, its value is 0 points as well, but it makes playing move c very valuable next for White, and forces Black to answer by taking a 0 point value move for Black; but denies White the ability to take a 15 point move.

So maybe I should have written the 1st move as follows:

If you can find a white move that has the property of increasing a secnd white move in TWO areas, then you have probably found a great move. A dual purpose move, a winning move?

This idea of simply valuing a point on the board the same for either player makes no sense to me. But putting a different yet fixed value on the play for each color and identifying the value of the subsequent plays in the area seems worthwhile to me in understanding this game.

Understanding the value of a move in this manner would help us figure out why a small-looking move or a slow move is in fact very big, and why ending in gote to defend properly is important sometimes.

Could a card game be devised that has these properties? I think I may try this, probably starting with the endgame and moving backwards.

ChessWhiz: No, this is all very interesting. :-)

Charles Matthews I have found it very useful to explain ko fights by a game of Card Game Model of Ko. I believe a number of people have come up with the Stacks Of Coins metaphor.

SAS: I can't make any sense at all of what you are saying here. Where do you get these values of 2 for Black and 15 for White? The difference between Black living or dying here is at least 22 points (more if Black can hane and connect in sente on either edge), but you seem to be saying it's only 17 points.

And why this imbalance between 2 and 15? Even if we were to assume (incorrectly) that the difference is only 17 points, why do you assign 15 to White's move and only 2 to Black's? If there were two such positions on the board, Black would die in one and live in the other, so it seems clear that the Black group is exactly halfway between being alive and being dead, and therefore a black move making it alive is worth exactly as much as a white move killing it.

I'm not necessarily saying that you are wrong about any of this, just that I have no idea what you're talking about.

Joe Seki: I can't count all that well, but I've always had a problem with the way most books figure out counting. It doesn't make sense to me. What I see in books being calculated is average value of moves, not immediate value of moves. Or when you multiply by 2 because it's double sente. or half the value because it's gote. But sometimes a one-point double sente move is more important to play than a 20 point gote move. What isn't being said is that the one-point double sente move actually threatens a bigger move forcing the opponent to ignore the taking of the 20 point gote move, and thus you get that as well.

What I'm trying to do is come up with a value that helps you determine which is the biggest move in a string of moves. By adding up the resulting string of scores you have collected you know the optimal play. Being able to calculate immediate values and then assess what the next move values would be and how it's influenced by the current move seems important. Right now I'm not trying to get an actual score that will be the result at the end of the game. But a relative value can be assigned to a move that maintains the difference in score.

So in the above example. Black lives by playing in the 1-1 point. Further moves by Black here could increase is score by 1 point for each side he plays on. Further white moves force Black to answer though accepting the 1 point score or risk dying.

So the value of the move is relatively only 1 point for either side, but the next move value is huge for White, and Black must answer or give White the big move.

The real question I'm I suppose I'm asking is what is the real value of a move? I'm just thinking out loud and hopefully getting a good idea here to pursue.

SAS: The real value of a move is the amount by which it increases your winning margin (or decreases your losing margin), assuming perfect play thereafter. This is 0 if you play the best move on the board, and negative if you play anything inferior.

But the real value of a move isn't meaningful when you're considering a portion of the board in isolation. In this case we're not even dealing with an alternating sequence of black and white moves, because either player may tenuki. We can, however, measure the value of a position (relative to some arbitrary zero position) without regard for who is to move, and see how this value changes for various possible black and white moves. But I don't see how you can reasonably avoid using average values in this situation, because the ultimate value of a position is unknowable (since it will depend on which side chooses to play here rather than elsewhere on the board). In any case, have you looked at combinatorial game theory?

The "multiply by 2 if it's reverse sente" (you said "double sente", but I don't think you could have meant that) only applies to deiri counting. If you use miai counting instead then this sort of adjustment isn't necessary. (Unfortunately, the current article on miai counting is brief and doesn't really give much of an explanation.)

Ellbur: I don't think this applies to the current content of this page, but it is what the title made me think of: Is there any game that is exactly equivalent to Go? That would mean that every move that could be made in one game could be mapped to a unique move in the other, and equally good moves would correspond. There are many such equivalents to Tic-Tac-Toe, but I have never see one of Go. I suppose one such game must exist somehow, in theory, but is there one that is played in the real world?