Bill: This does not seem to be an established term. It does not appear in the Go Players Almanac glossary. Does anybody have an references in the literature? 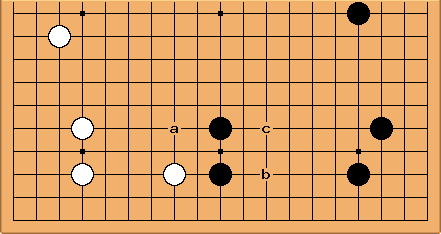 Simen: Fujisawa Shuko uses the term in his Reducing Territorial Frameworks, to describe plays like in the first diagram on the Ear Point page (the second diagram doesn't seem to fit Fujisawa's use of the term, I don't know where OP has it from).

If a in the diagram is too slack (letting Black extend his moyo), and b is too deep, White may play at c, the Ear Point.

Bill: Thanks, Simen. :-) Does anybody know the Japanese term?