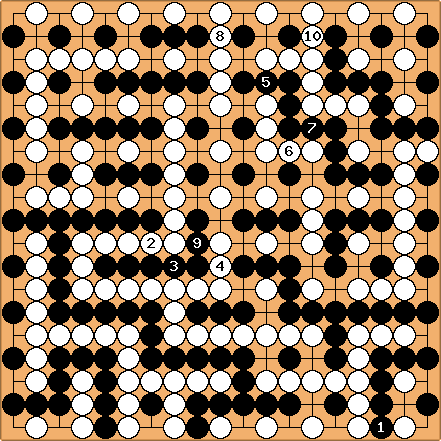 What I want to mention is that

is a very big endgame move, mainly because it affects the eye space of both Black and White groups, and therefore sente for both players. Earlier, Black has no chance of playing it. But I thought that

could be played at 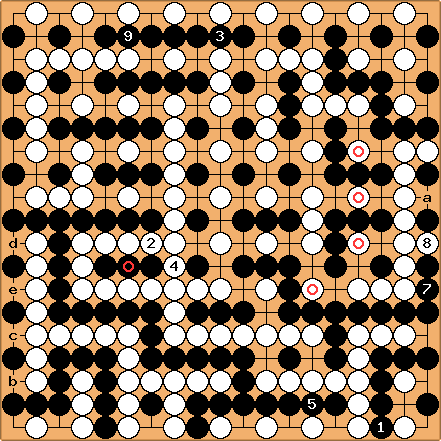 connects, then I guess

has no better move than to capture the three Black stones. But

must play in the middle of the three stones (at

can proceed to grab the next big point. I think

together can compensate for the 5-point loss for losing the three stones.

should also be grabbed early - it is a 5-point sente for Black.

saves White's group, White must eventually capture at a. Also, later on Black can capture one of the

stones in gote (or White can save it in gote). So White's local count is only 3 points of territory, 4 points on the side minus 1 point for the stone in jeopardy. But if White plays the reverse sente at

, White gets 8 points of territory. That's why

is a 5 point sente. (By territory scoring. By area scoring it's worth 6 points.)

LukeNine45: I'm curious: does it matter how big it is? Since there's no ko, is there really any reason to avoid playing sente moves? For example, what about the sequence I marked above-- Black b through white e-- in real go it would be aji keshi (probably) but is it here? I realize that black will probably be able to play this before white can play the reverse sente, but is there any reason to wait?

WillerZ: It's not a habit you would want to get into, but in that specific case it would be fine. The risk you run is that a move turns out to be less sente than you previously thought. If White has a move that killed more stones than Black c or e kills, she can ignore a Black play at b to do it. After that White plays at c or d are her sente too, so it's extra valuable. I don't think there's anything bigger around in this case.

WillerZ: After the diagram above White needs to be very careful - if it becomes impossible for the White group which captured the three black stones to connect out then a Black play under the stones at

will kill it off. It may already be impossible, I haven't yet read it all out.

has already been played at

before the end of the last diagram.

WillerZ: So it has; I read that paragraph several times and still managed to miss it somehow. I've added a parenthetical

to make it more obvious to anyone else with the same thought as I.

LukeNine45, it seems that playing a sente in dots go loses a dame. That can be a problem if a semeai develops. Besides, if you wait your opponent might take the reverse sente too early.

LukeNine45: Gotcha. Keep liberties (though not an issue for the completely alive black group at the bottom) and give the other side as many chances to mess up as possible. 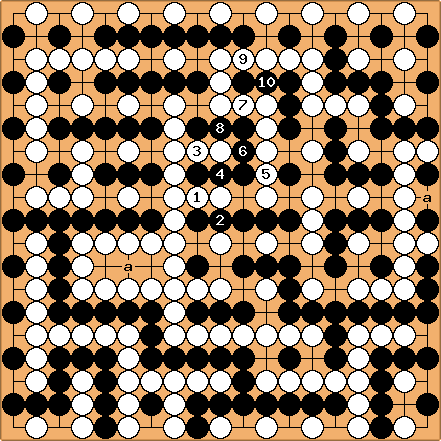 Alex: See, this is what bugs me about Dots Go. I can't wrap my brain around things like this... I was sure that

here instead of a would work because if

, SURELY White must be able to capture a stone somehow, up above. But no.