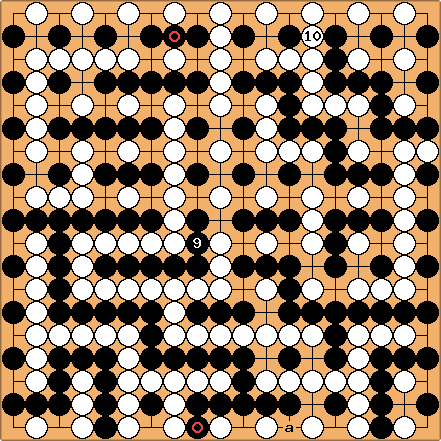 ) was the last losing move. A play at a instead holds Black's huge group that spans the left half of the board (

) to one eye, and it loses the semeai with White's group to its right.

) would be the losing move for black (as it should have been). If

had saved the group like it should have, then

, resulting in the same position. If my thinking is correct, then hasn't white actually made the "real" mistake somewhere else? In other words, if

had been correct, then this would be an example of "black losing the game" instead of "white winning the game," no? (At this point, I re-read what you said and noticed the word "last". Oops, sorry. What were the prior losing moves?)

Bill: My impression was that White was fighting an uphill battle for most of the game. But I do not understand dots go well enough to comment about the opening. Overall, I felt that too many plays by both sides were too concerned with the capturing or saving a few stones instead of playing the whole board. However, I think that dots go is, relative to regular go, a low scoring game, and influence acts differently, so that maybe I am wrong about that.

Anyway, I think that it is a good exercise to try to find the last game losing move, and here it was easy to find.

unkx80: Regarding the last losing move, I have made a similar comment earlier (but after the game has ended) at / Move 83 discussion. 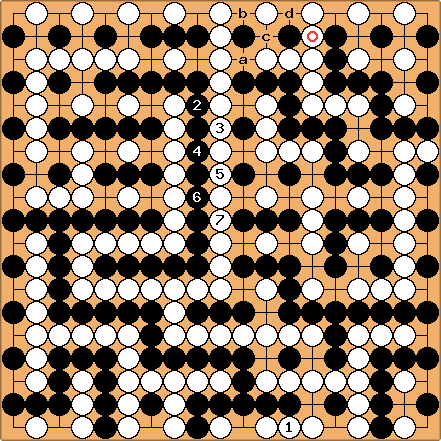 Alex: Unfortunately for my ego, Bill is right. I immediately felt stupid for my move on the top side after I'd played it, though for different reasons (because after a-b-c-d we're left without eyes), so there probably should have been a better way to connect those stones while making an eye... so I was happy that we managed to pull of seki.

would escape or cut off some stones, but of course all our stones are connected in a very roundabout way so we can let him link up with his other eyeless stones and, as Bill says, win the semeai.

Dots Go is not a good game for me. I'm very prone to hallucination even in regular Go and the crazy spiraling dragons and billions of miai points of Dots Go are way too much for me to keep mental track of. If you were going to invent a game to play to my weaknesses, this would be it. ;-) 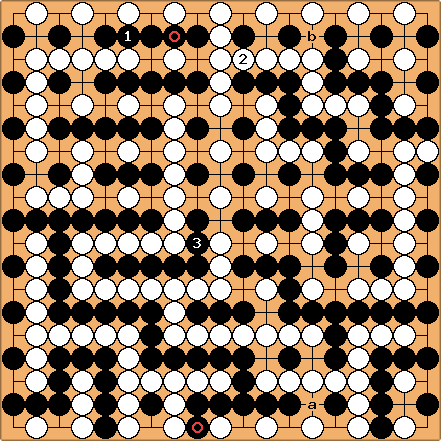 should be played as shown in this diagram, not at b. The reason is that if

is played at b, Black can play

, causing an exchange of 5 black stones and 7 white stones, which is profitable for Black.