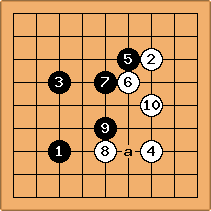 Not sure how to describe my move (as a newbie realizing some advanced folks watching ^_^;) Hopefully give some presense in the center area.[8]

I guess I'm shoring up the side, but it seems like you have a better overall board position. 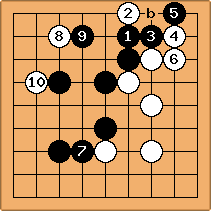 OK. Not sure this move makes sense. Also thought about a (now

), but it seemed like possibly giving up territory. My chosen move seems riskier since black could move to b. Learn as you go...(pun intended). [10]

I could probably kill

by playing at b, but I thought this move will be better in the long run.

Not feeling good about this, but trying to stem the flow. 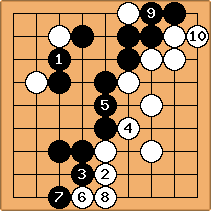 A little slow to move.

Wish I could take more 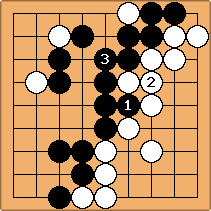 An effort to reduce White's territory.

Outsider's comments are welcome!
[1] Actually, the book says that this connection is not as strong as

or the slightly slanted one from

to a. It's written somewhere here on SL, and whoever looks it up will find a nice follow-up move for this game.
[2] Hmmm. I'm going to have to think about why it's a stronger move. I get the feeling 9x9 games are a little different than 19x19 games--much quicker move in to middle game.

[3] PurpleHaze: This is not cautious. 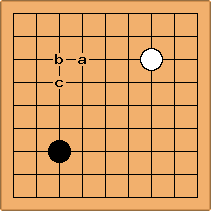 However, this is the correct direction of play. A better move would be this

aiming at a, when white responds to prevent a you would take the large point at b. 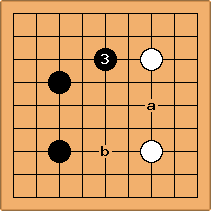 [5] PurpleHaze: This is not in any way a block. This is a hane, an invitation to fight. There are two competing basic instincts here. The other is to extend. Black's stone would now be very weak and he would be forced to re-enforce it giving you time to take a big point like a. 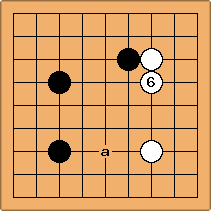 [6] PurpleHaze: Again a hane not a block. And again a fighting choice. Alternatives could be ... 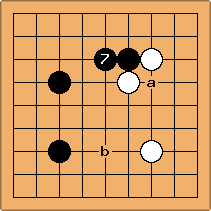 Now white must patch the weakness at a, giving you time to take a big point like b. 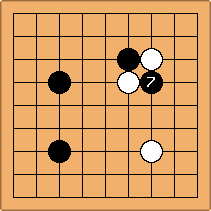 [7] PurpleHaze: A small territorial move in an irrelevant part of the board. The upper right corner is set to explode. That fight will decide the game. Instead tenuki ...

PurpleHaze: Urgent points before big points. Size is relative, b is only large when the upper right is quiescent. If you undestood my comments they all say: settle the upper right in sente so that you can take a big point. Both of you have made the fight in the corner larger and more violent, then tenukied!

[9] PurpleHaze: Now that the corner has resolved to some extent, I'll comment on this position ... 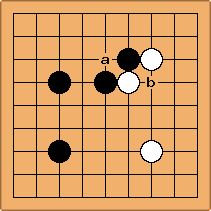 This position is very urgent. The cuts or connections at a and b must be settled now. So lets look at some of the options ... 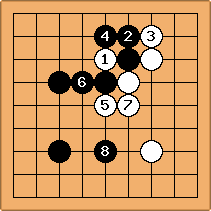 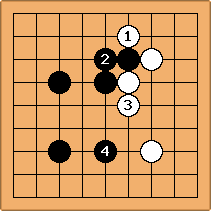 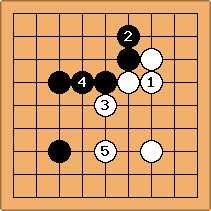 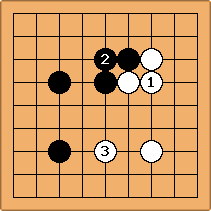 Then there are more difficult ones ... 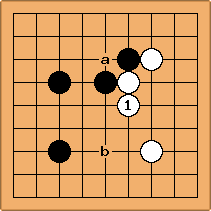 Can black play b and allow white to play a? Or must black protect the cut?

[10] PurpleHaze: The worst move on the board. Passing would be better, at least it would give Black one less prisonner. Passing would also give Black the opportunity to make an error, this forces him to play the best move. 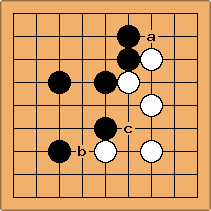 If you pass Black's choices are a, b, or c. All of which are good sente moves. 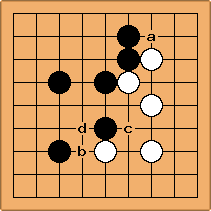 Therefore your choices are a (the solid and territorial, perhaps honte, move), or one of b, c, and d (trying to keep sente to play a later).

[11] PurpleHaze: Oops, letting him off the hook.
DosGatos: Good point! 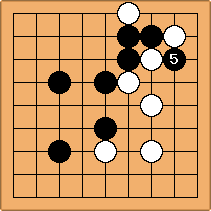