The round 2 game Csaba Mero - Robert Jasiek of the European Go Championship 2002 in Zagreb used the rules of play of the Ing 1991 Rules. The game would have been a win for Csaba Mero by about 30 points under some other rulesets, however Robert Jasiek claimed that all of his stones, which Csaba Mero did not remove even after resuming play are technically alive under Ing 1991 rules.

The players started a complicated dispute about the intended meaning of the rules, what is a Game Pause, what is a Game End, how to proceed passes and game ending procedures according to the rules, what the rules mean with "life" and "death", whether executed passes may be overridden etc. The dispute was settled in Csaba Mero's favor, and that ruling was upheld on all appeals.

This dispute later motivated the EGF to adopt of the Simplified Ing Rules.

The game was played. Shortly before the end of the game, Robert was estimated to be about 30 points behind. Two successive passes occurred (first by Robert, second by Csaba). Then Robert Jasiek proceeded with board-plays to remove all those stones that Csaba Mero could not save (i.e., from a strategic point of view, dead stones inside his own territory). While he was doing this, Csaba continued to pass every move. When Robert had removed all stones he could, he also passed. Csaba then passed (3rd pass in a row) and Robert also passed again (4th pass in a row). Robert made the claim that under the 1991 Ing rules, all stones still on the board after four consecutive passes are considered alive according to the rules, and the position should thus be scored as such. This would mean that Csaba would lose, as there were still stones inside his territory that, from a strategic point of view, could have been removed, and that, if considered alive according to the rules, would turn quite some of his territory into shared breaths (what Japanese rules would call dame).

For more details, and opinions on the rulings, see: /Discussion.

Board position when dispute started 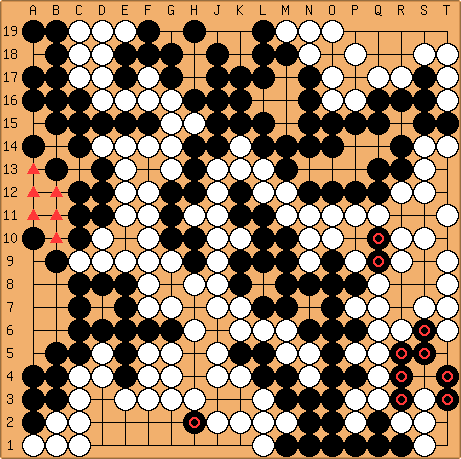 http://baduk.pro/pg/video/breakfast/read/906/robert-jasiek-vs-csaba-mero. The area marked with

isn't clearly visible, so may contain something else as well. The disputed stones are