The fourth game under study is a tough one. It contains many moves that switch from one side of the board to the other. These moves show the relationships the pros see between seemingly unrelated parts of the board. The game is a great teaching resource for that purpose, although Otake has no match in the unconvincing Hanadate Maasaki?. Otake-san is White. 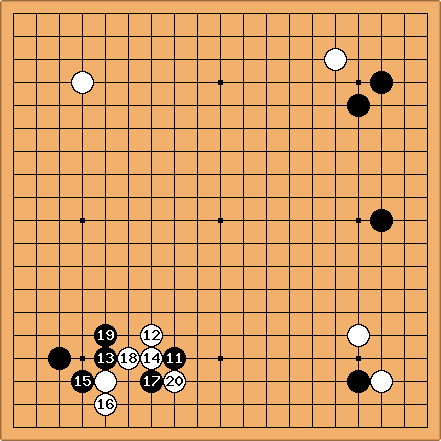 The lower left is settled fast, with a known joseki up to

. The lower right is hot, after Black has abandoned it in favour of a position on the right side. 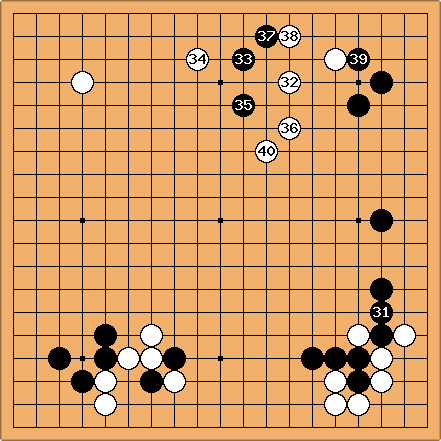 is an unusually short extension. I don't like the opening that much for White. But

looks suspiciously close to the already overconcentrated white shape. Up to 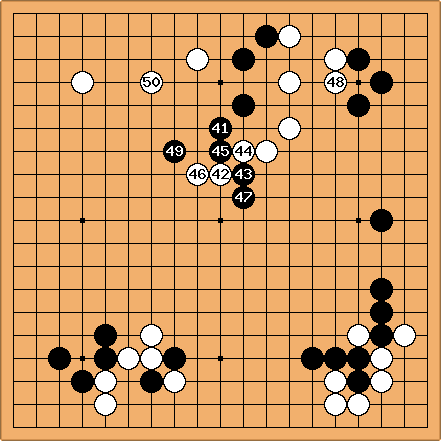 The windmill in the centre becomes the focus of the game. The corners are evenly divided, there is still an open left side, so the centre will be decisive here. 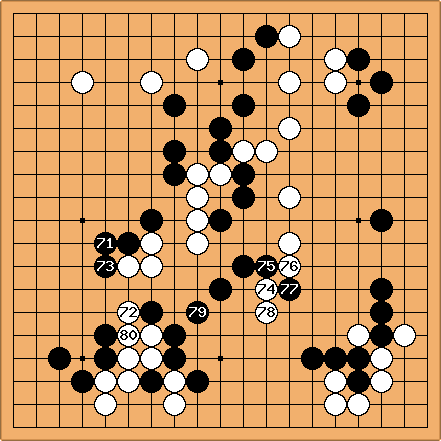 The groups have run towards White's lower side formation. Black has used his aji there and builds up great influence with

is fighting desperately in Black's influence. Especially when

forces the lump at 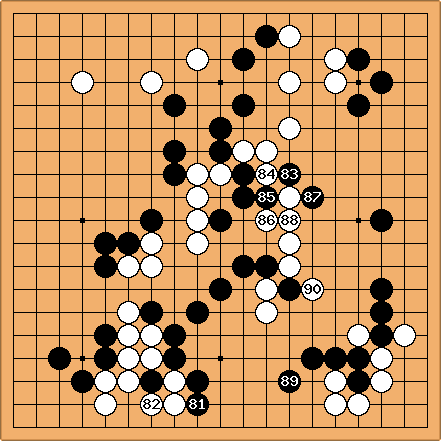 But then Black cuts at

and the cut doesn't seem to bring much good.

threatens to capture the pivotal stones. On top of that,

moves away from the front. There is something in Black's moves I don't understand. 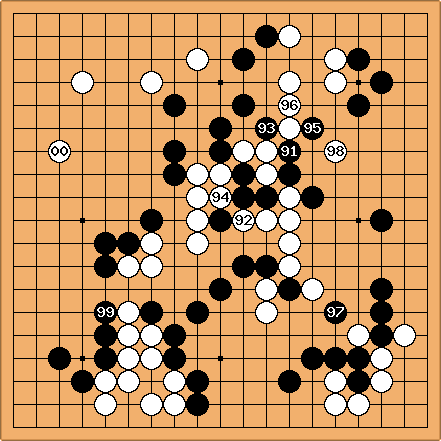 Next there seems to be a trade, of the pivotal stones against White's top group. But that group is flexible.

looks very slow in making good shape for Black's spread out stones. With

Otake takes command of this game.

is another move I cannot applaud (I will regularly apologize for my scolding pro moves - it expresses my lack of understanding). White's move 100 invites a corner invasion. 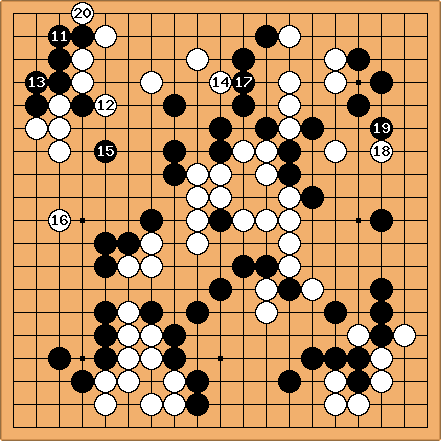 We skip the well known invasion pattern, up to

. Otake wants to force with

and Black tries to counter with a forcing move at

. But this must be (another) mistake, since

is a painful answer, intruding the sphere of influence Black had built up as a compensation for losing the central power. So he answers with

. Otake clearly enjoys the power of his centre stones! (I think

is some kind of a time suji. 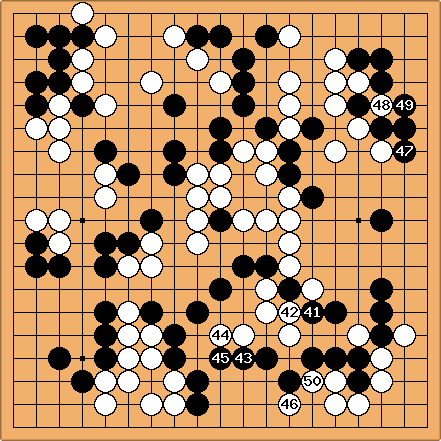 Skipping 20 moves we see how Otake moves against the bottom group to weaken a potential connection from the top group, instead of rushing to play at 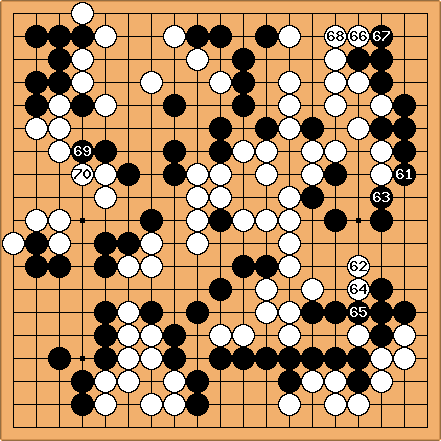 There have been some endgame moves in between.

is what I would call an Otake-move: it threatens to cut up the groups again. I feel 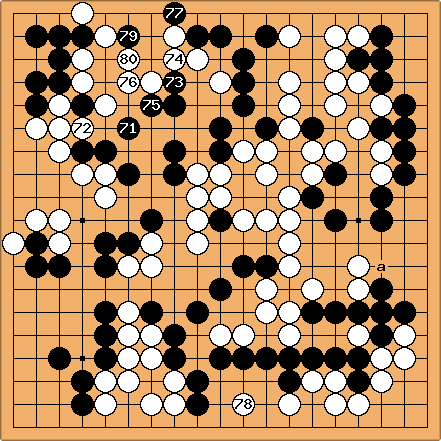 Black tries to show some of his own reducing skills, but

is unimpressed and strikes another blow at Black's thickness. Despite all moves Black has invested here, the group now still needs the connection at a. White cannot break through immediately, but still the loss of strength at the bottom is rather humiliating. 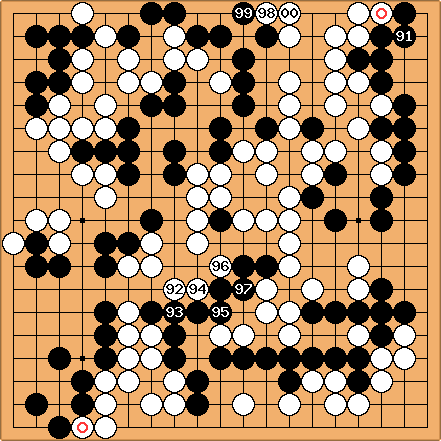 , showing that sometimes there is territory in the centre?, especially when you are Otake. 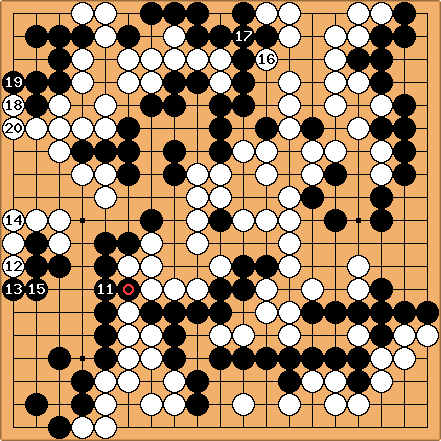 is much bigger than the dame connection. After 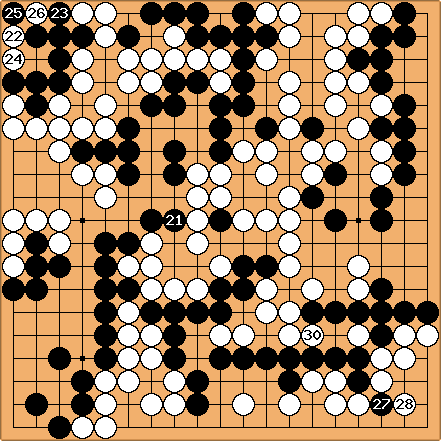 I can only explain

as an preparation to resign. Black is already about ten points behind and the ko is just too basic for a pro not to see it. 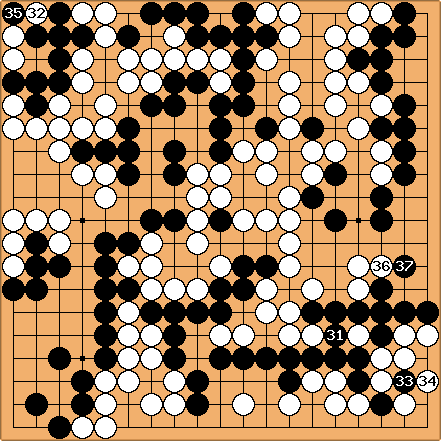 Black resigns after White 238 retakes the ko. The fact that

could become a serious ko threat and leaves some more threats, shows how well Otake has exploited his central power against the right side. As said, his opponent played an unconvincing game, but it allowed me to learn about weakening a group by weakening a friendly group while taking some territory.