Cooling is a concept from Combinatorial Game Theory which reduces a hot game in which both players are eager to play to one with lower temperature. This is achieved by having each player pay a certain tax (the amount by which the game is cooled). Or, in other terms, having other more interesting situations on the goban.

BillSpight: Cooling may be defined in terms of play in an environment of plays. This environment is richer than the go board, but is a reasonable approximation of it when there are many plays.

(The outer strings of stones are assumed to be alive)

Here, if Black goes first, he gets three points versus White none. If White connects, the score will be zero points for both players. So the temperature here is 1½.

We can cool this game by requiring that each player gives a certain number of stones to his opponent as prisoner, to pay for the privilege of playing here. If, for instance you need to pay one stone, the result when Black goes first will be 3 vs 1 (because of the tax), and when White goes first it will be 1 for Black and 0 for White. The temperature has been reduced to one.

If the tax were two stones however, none of the players would be interested in playing in this situation: Black would after capturing be just 1 point ahead due to the tax, and White would give Black 2 points by connecting. Clearly, each player is going to wait for the other to play.

The situation becomes interesting when the tax is determined at one and a half stone (half of the temperature, but that rule of thumb doesn't apply in more complex situations).

The result would then be that Black comes out 3/2 points ahead regardless of whoever plays. Since this is then a gote play (Black stops 1.5 ahead with White to play and vice versa), no play is going to be made here.

Bill: If the tax is 1.5, this cools to *(STAR), a fuzzy game in which the player to move wins. Of course, a player will prefer to play in a hotter game, but the tax is not high enough to prevent a play.

If you graph the left and right stops as you increase the cooling factor, you get this diagram: 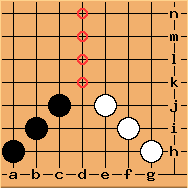 walleye: Bill says above that cooling by 1 point makes dame invaluable. So this takes care of the dame, but what about teire? Is there a trick to make teire invaluable too?

This position is quite common, 'a' is a dame and 'b' is a teire. Black and white should pass here if they follow the traditional way of playing. However, according to the theory, 'a' is not really a dame. Or is it?

Bill: The miai value of this position is -1. It has an integer score without play. a and b are miai. (The rules may force play to get the right score at the end, however.) And, OC, a may be a ko threat for Black. At this point a is a dame in both senses, as it is an empty point next to a stone, and it is a neutral point.

Alistair Turnbull: There's quite a good description of thermographs here:

xela: I will try to work out some more examples, in painful detail and maybe with a few mistakes, at /examples. Others are very welcome to add to or correct that page!