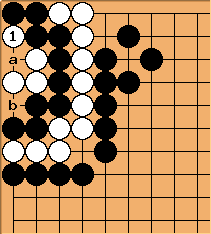 Confused: The best move I found was to start a big Ko fight. Althought White playing at a would deny Black two eyes inside, White's outer group wouldn't survive long enough to fill the Black eye.

Dansc: As we know, a six-point big eye produces 12 liberties. Counting the four white stones inside the eye, black still has 8 liberties - white, on the other hand, has only three. If white plays at a, black can play elsewhere five times and still win the semeai. 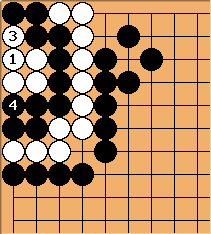 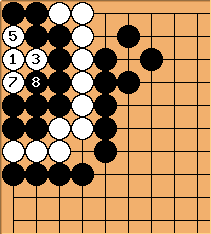 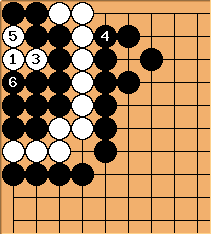 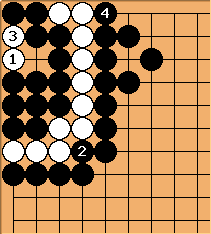 BarkOfDelight: Is this a fair problem for a beginner? The answer seems to be "White can't really do much." Is that the point of this problem? Just doesn't seem to fit the spirit.

Pasky: The idea here is that white cannot simply win the capturing race but has to opt for the ko - that is still plenty, much better than simply losing the semeai.

Berlioz: But black doesn't have to take the ko at all, he can simply kill whites outer group, so white is dead no matter what.

to start the ko, it is an atari against the black stones, so if black starts filling liberties on the outside, white can capture. Therefore, black has no choice but to play the ko if he wants to capture white.

Doesn't it only take one play before black captures by playing at b? 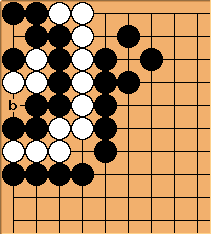