". What does that mean? I guess that

is same as the numbered black stone, but what does "at

Confused: It's a convenient shorthand for describing simple variations of a diagram.

means, the situation if Black would have played the second move (

) at the location of the White stone at

. Here Karl Knechtel was writing about the following case. 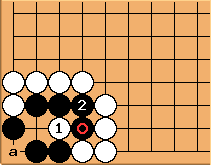 Confused: It's a tesuji, although I'm not sure if that play counts as nakade too. If the definition on the nakade page is correct, I'd say it isn't one.

This is one of the reasons, why I avoid throwing around Japanese terms I don't understand completly or for which there is a good English translation. Some of those concepts are complicated enough on their own, that I don't need to confuse the matter more with the wrong Japanese names.

[1] A black play at a is safe from that, as I'd originally thought, but I managed to confuse myself somehow. Thanks SAS. :) Anyway - see Ko threat exercise 3 for more information about that sort of tradeoff.

unkx80: I think that b is better than a in the context of this question, for two reasons: (1) It claims an extra point of territory, (2) It creates a cutting point. The group in Ko threat exercise 3 is different in the sense that either of the two points there has equal value except for ko threats, so the one giving less ko threats might be better.

Coyote: Depending on the situation, I would go with "b". That is - if I have more Ko threats then my opponent, especially if the threat of the cut can give me Sente. If it looks like my opponent is getting more Ko threats then me, I can still close it off, losing the point of territory. But not until I have to, because whether now or later, the move is Gote. - Coyote, 17kyu