First, I'll just show that White in the corner is dead if White does not play there. 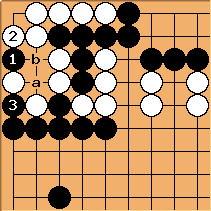 In this game tree, White needs both a and b to live.

zinger: White is not dead. It is a ko. After

, white plays b, and if he also gets to play a, his group is alive.

Warfreak2: Thanks, I missed that; I was thinking

was still there... oops. 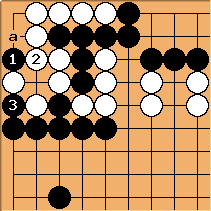 zinger: Same as above: white plays a, and it is ko. 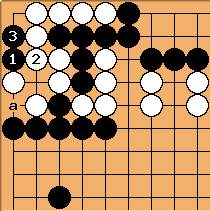 and White is dead because she can't play at a.

at 3 is the right way to achieve ko here. 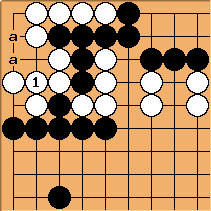 forms a bent four, which is usually a living shape. White is split into two chains, but each have three liberties. Any Black stone inside the bent four would have only two liberties, so it can be captured before Black can capture either White chain. Of course, White at either a would form two eyes, so White is alive.

At least, I think so. Anyone want to make sure I'm not missing something?

zinger: I believe black does have a way to kill white unconditionally, which is not yet shown on this page.

Warfreak2: OK, but is this the correct move for White? It is, after all, the one I suggested :) I wasn't sure it worked exactly like a bent four, as there is a cutting point. 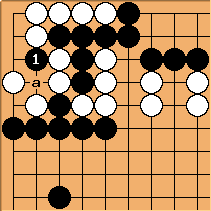 Also, am I correct in thinking that

zinger: No. White answers at a. Now what does black do? 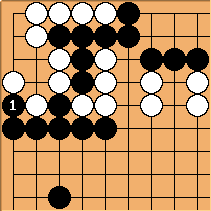 AJP: Coming in from the outside against a J group type connection like this is a surprisingly severe attack. 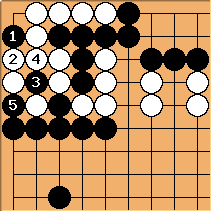 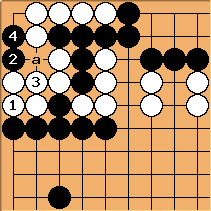 in your first diagram is Black's best move, then this is indeed a counter-example to Your Opponents Good Move Is Your Good Move:

is atari so White must play

is self-atari. Black can kill at a.

Shaydwyrm: Black need not play at all after

. If white plays an additional move, either a or