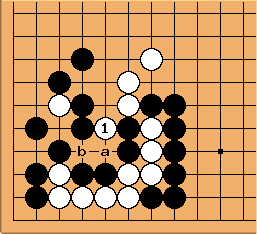 Black is caught in a connect-and-die. If Black a, White b captures. Otherwise, White captures at a, and is connected to the outside and escapes, thus living (by tsumego convention). White can also live by starting at a.

zinger: White a does not work - see the diagrams below. 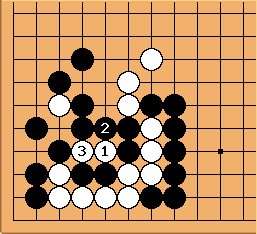 The double atari is wrong here: Black chooses which group to sacrifice, preventing White from connecting and escaping. Note the the bottom row of four is good for at most one eye. After White captures (perforce: if White tries to start making an eye below, Black will capture and White only gets one eye), Black reduces that to no eyes with two hanes: 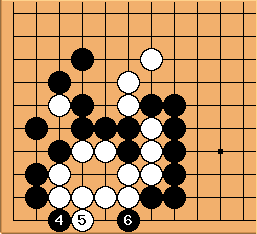 This shows that White has only the one eye. 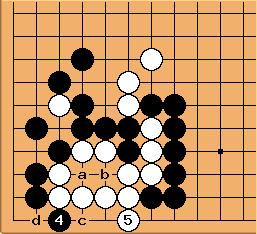 Wauske: If white were to play 5 wouldn't it mean that, if used correctly, it would live? Meaning that black can respond at a or b white would respond at the other and that c would be followed up by d? 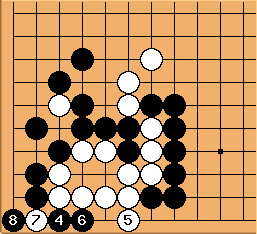 unkx80: Are you saying that

may be answered by 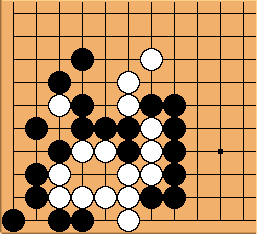 This is the end result. Is White alive, i.e. does White have two eyes? 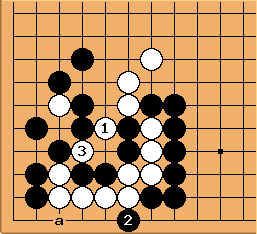 I'm a beginner, but I think that if black plays

, a or tenuki, white should play

. Black is then caught in a snapback, wich makes life for white without need for connecting to the outside. So best for black is to play

to prevent that. Correct?

Andrew Grant: No. Once White plays

she is alive, since the two black stones cannot escape. If Black plays

White should ignore it and play elsewhere since White is alive already.

only captures another two stones, which is too small to bother about except in the late endgame. And if Black plays

it's just a waste of a ko threat.