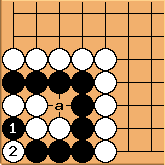 If black wins the ko at

, then capturing at a makes a twisted four and the group lives.

or at a forces a capture by

at the other point, leaving a bulky five, and black dies.

ChrisSchack: I'd prefer tenuki unless you can and must win the ko. The ko is unfavourable for the player starting it, and W playing at 1 leads to a gote seki.

Yeah, I looked at this without a bell going off. ;-) Thanks for pointing out that tenuki is a real option. This is an advanced problem.

However, these things are paradoxical. If White is komaster, Black should often start the ko, even though he loses it. The point is that he gets a play elsewhere while White wins the ko. If he waits, then the value of that play will probably diminish.

Things are more complicated when Black is komaster. If other plays are worth enough, then White should normally start the ko for the same reason that Black should when White is komaster. Then there is a temperature range where neither side will typically want to play, and then at lower temperatures each side will want to play because White now threatens to make seki.

unkx80: When I constructed Beginner Exercise 191, I had not noticed the tenuki option too. But I realised it when Dieter wrote "... the best

to recover from the mistake at

Whether this problem is advanced... I do not know. If we discard all that temperature talk (sorry Bill ;)) and use the intuitive description as presented by Chris Schack, then it should fit the beginner exercises series since there are only so few variations and each variation is no more than two moves!

Dieter: Tenuki was the intended answer, before I realized that this is in fact a kind of thousand year ko, hence an advanced problem. I agree that there are few enough variations to stick with "beginner" level but also with Bill that the variable status of this problem as play progresses, pushes it into the "advanced" section.

Bill: It is an important point, but beyond beginner level, that it is often best to start a losing ko yourself. Things are even more complex here, because White has the option of making seki. The thing is, tenuki is typically not Black's best option here unless he can win the ko, or neither player has ko threats.

As for Beginner exercise 191, I think just pointing out that this result is a 10,000 year ko (and hence a failure) is good enough.

The play of 10,000 year kos is something I had hardly a clue about until I was a dan player. An advanced topic, I think.