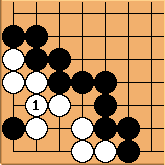 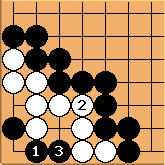 can make seki. Or White can simply play

for 7 points in the corner. 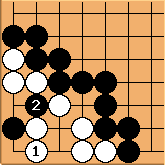 White dies from snapback after 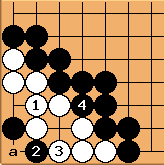 to start a ko, which Black takes first at a. However, this result is inferior to unconditional life. 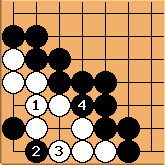 Anonymous spoofer - While this is a Ko, it is in White's favour; is it really a worse outcome than seki? (Note: this comment was originally signed as if it had come from me - Alex - but I did not make it)

fractic: This ko is not in White's favour at all. Sure he gets to take the ko first but Black loves playing this ko. Black risks absolutly nothing while White's whole group is at risk. See hanami ko

LukeNine45: White should only go for the ko if White is guaranteed to win it, a case that will be rare since Black risks so little here. In some cases the ko will be better, but usually the seki is. Also I think seki is usually considered better than ko (for the defender) in L&D problems.

xela: "White should only go for the ko if White is guaranteed to win it" ... I'm not sure if that's actually true. (I don't mean to be pedantic; I'm testing my own understanding here.) Let's try and work it out:

Someone please correct me if I've got this wrong. Of course it's all hypothetical--usually there are more ko threats and it's much more complicated. As LukeNine45 says, in life and death problems (where you're not shown the rest of the board, and know nothing about ko threats) the convention is to prefer the seki solution.

Since the corner will normally be played out when the hottest play gains 3.5 points (5 points by area scoring), White will usually not be able to effectively make the ko, as winning the ko will not be worth it.