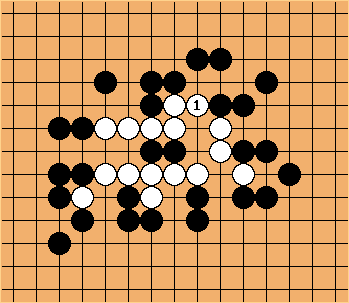 Splice: I can only seem to make White live in seki with 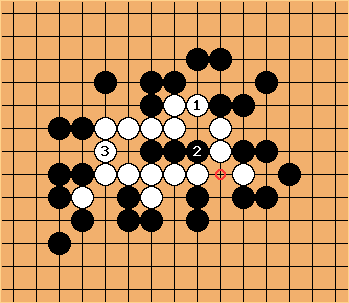 , White will be able to make two eyes.

makes seki. If Black plays inside, White gets a bent four and lives. If White plays inside, he only gets three in a row, and dies. The circled point is the only possible weakness, but Black cannot get it before White connects it. 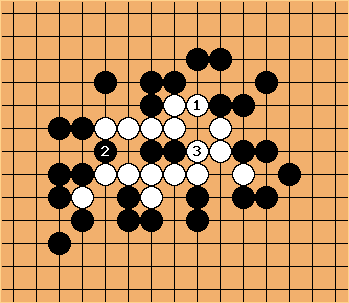 White has two eyes whatever happens. 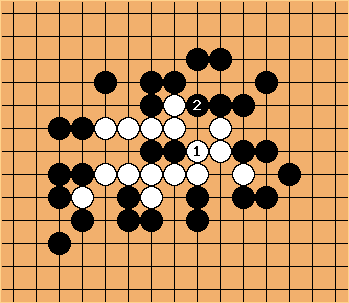 does not work, because

reduces White to one eye. 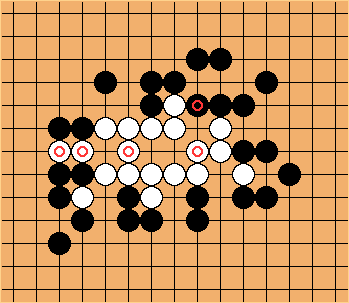 It seems to me that, yup, whatever you do, even giving White five moves in a row, if White doesn't put one of the stones on that circled point and Black takes it, White dies. So, that has to be the first move. 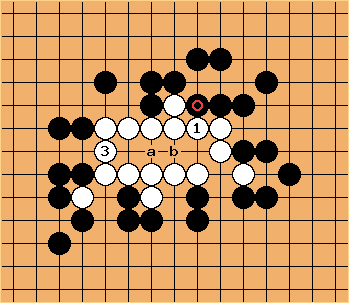 Kevlar: I'm a bit confused, with just 2 moves in a row, can't white live unconditionally with 1 + 2? (leaving a+b as miai) 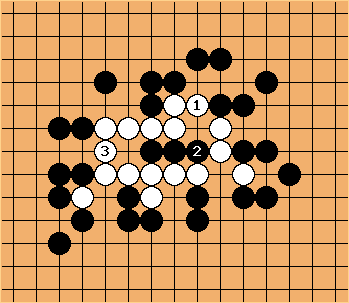 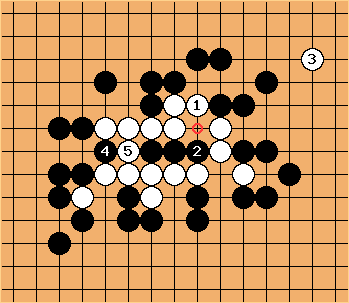 Referring to the Seki 1 diagram:

I think Black can only make it seki.

Black can't kill White with other plays and

will make it seki after

Referring to (Not a) Seki 2 diagram:

is played elsewhere, Black can play

and White is dead. White can answer at the

but Black can eventually fill in ALL the outside liberies, leaving just the the circled point as Black's last move to kill White. If White plays at the marked point, she dies. After

there is no need to continue.

in Seki 1 makes the white group alive (without territory) and Black's three stones are alive as well. 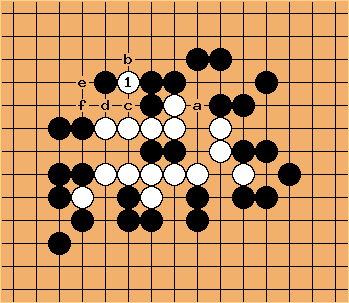 Anonymous: Given the right sacrificial plays are made by white, it appears as though white can always live via the extensions made possible by this move. (whilst letting black take into the consideration of the need to stop white forming 2 eyes in the center)

zinger: White cannot escape this way. Black can answer with a, giving white a dead shape. White still can't get out - b and c are miai - so white dies.

Anonymous: Umm, the way that I see it, white could respond to "a" via "d". Now having done this, it seems as though black has several choices. If 'b' or 'c' are undertaken, white could respond by playing at "e" followed by "f" if it isn't taken or, in the case that 'f' is take, it could just take that black stone and progress further. (albeit a bit hard, but it's plausible) Indeed, black should probably take "e" or "f" instead of "b" or "c" in order to increase its chances of killing the white stones, but anything further is fairly difficult for a novice such as I to deduce. However, dependant upon the surrounding stones, the situation maybe be greatly affected to white's advantage, despite the absence of a strong continuously adjacent white "connection". (sorry about the absence of proper lingo) 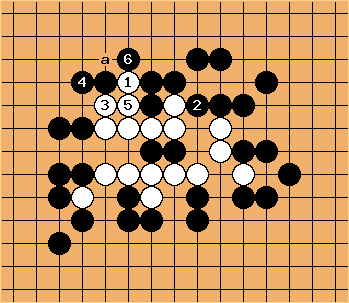 zinger: Here is a diagram to clarify. Hopefully this will show that white can't get out. If white tries

, then black plays at

, and white is still stuck.

Also, when problems are presented, the standard assumption is that the stones shown are the only ones on the board. Therefore, outside cutting points such as a do not matter. It is true that this assumption is not true in a game; but it is the convention we use for solving problems as local situations.

You say you are a novice. Welcome to Go! We hope you stick with it, and come to enjoy this fascinating game the way we do. Good luck :)