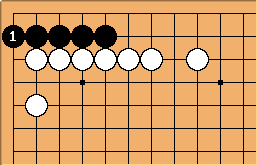 takes the corner for eye space. Now the best White can do is to minimize the eye space available, but the available space is sufficient to ensure life. 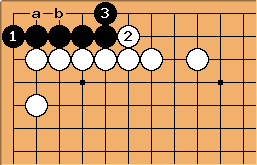 For your viewing pleasure, some failure diagrams: 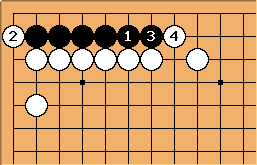 Black, in his attempt to take more of the side, loses after

: on the second line, six die but eight live. 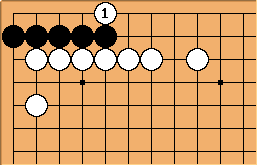 It seems that black must ultimately play to the right of

, but he cannot avoid filling in his own eye: 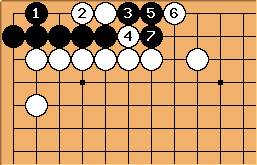 and black's right-hand eye is falsified. The same will be true if black plays 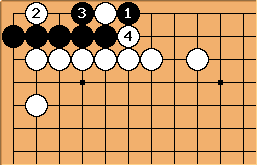 and black dies as before. How can black respond? 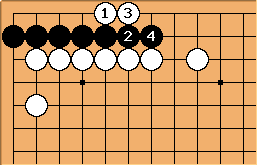 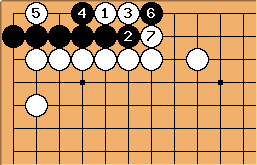 rokirovka: As a beginner, I find it helpful to show the shortest variation that proves the black group is alive.

threatens to create two eyes in the corner. White plays

to reduce Black to one eye in the corner. But now Black plays

, creating a second eye at

, and the black group has two eyes and lives. If White plays 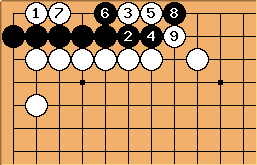 Also, I find it helpful to show the shortest route to life for Black if White plays at

. Black cannot play on the first line immediately: If

reduces Black to one eye in the corner, and if

takes away the point Black needed for his second eye. So Black extends along the second line with

, threatening to play next at

, which would guarantee unconditional life in the corner with a straight five. So

is the only try to kill Black. Then Black extends again with

, again threatening to play next at

with a straight six and certain life. So

is the only try to kill. Now Black can finally play on the first line:

and make two eyes in the corner.

reduces Black to one eye in the corner, but now

makes a second eye and Black lives. If White plays

in the original diagram,

would kill. White could then play

, and Black is dead with only one eye in the corner. 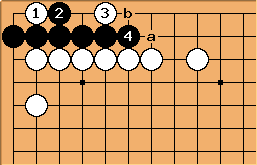 Elgoran?, 16k: Actually, Black can and will play

just gives Black another prisoner because of

. If White a, Black b and vice versa.

For your further viewing pleasure, some not so minor changes to the problem (by Sergio) : 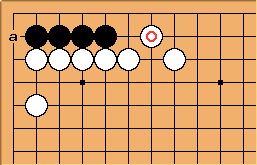 stone is on the second line (instead of the third) Black is dead...

But what should White play in answer to a ? 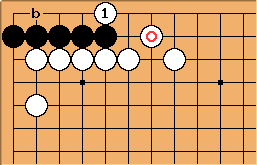 Even if it's not a clear move to beginners

is the only one that kills.

Deebster: Doesn't b kill Black too? 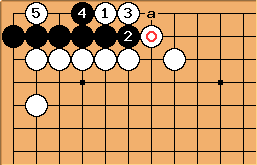 If Black plays at a, White kills by the throw-in at 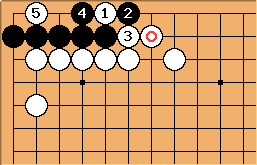 If Black attempts to capture with

to prevent an eye at

. If Black captures at

, the vital point of the remaining straight three. 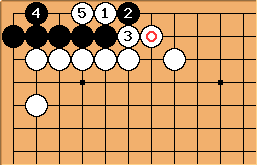 But what if Black plays

to take away the last chance for an eye. Capture

any time to kill the group.

So we can conclude that in the original problem, Black's threat of escape along the second row is necessary for survival. With

present, that threat disappears, and White can hane with impunity. 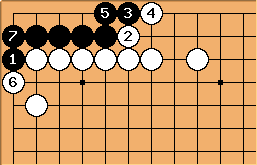 fred : would Black live with

? And is the rest realistic?