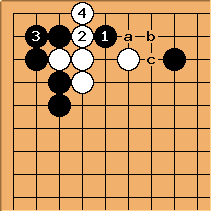 ajisubarashii: Paraphrased from a book: "After

, if Black at a then White at b, and the black stone at

is captured." Really?? What if Black plays at c after White plays at b? 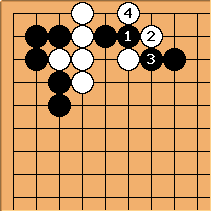 Herman Black is captured, he has no way to capture

is connected to the larger group of five white stones via the first line. I just learned another tesuji! :) 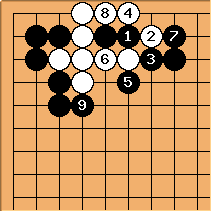 ajisubarashii: Thanks Tapir! The book makes absolutely no mention of this point, and gives the impression that capturing the two black stones would be good for White. The only chance White has is to kill some surrounding black stones. Let's read further in the next diagram... 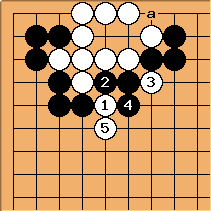 ajisubarashii: The big white group has 4 liberties, but Black can't approach at a without descending, so Black needs 5 moves to kill it. Hmmm..... if there was an extra white stone at a, then Black would only need 4 moves to kill the white group. So Black should have forced White to play at a earlier. See the next diagram 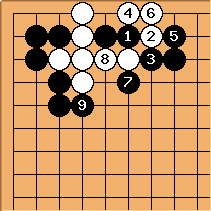 Are the surrounding black stones in any danger? If not, then White is dead.

Uberdude: The book is probably trying to teach the local shape tesuji. If the whole group is in danger white would presumably not immediately capture the 2 stones but push out at 9 (or knight's move) which makes miai of taking the 2 or further coming out and surrounding Black on the left.