This is a question about a Ko fight which is taking place. In the game, Black played

as a threat, but could he have done better? I thought of a few alternatives points, which I have marked - a to d. I am not sure though which is the best move to play here. 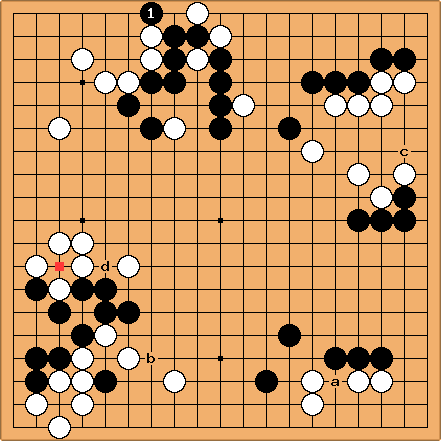 tapir: As Black I would be fairly relaxed with this ko. White needs to win the ko twice to remove the eyes from a group that then still can run towards another Black group. Definitely not the place, where you want to lose the game by playing out loss-making threats like c. What do you expect after d? I can't see White fighting ko and playing strongly here. In the lower right starting with a there are several threats, that in total may gain something. (And has White any threats at all?) However, I like

most, here is why:

tapir: I would consider answering a White threat played at

playing the mutual threat first seems appropriate to me.

I can agree to a certain point, but

still feels more like an endgame move to me. Regarding the ko threats - c is a bit of a ko factory, but it is losing points. d for me was the idea of taking the middle of the board.