Atulab(kgs:3k): I was just studying the 3-4 point, 5-4 approach, one-space low pincer, separate joseki. And I have trouble figuring out how safe the corner is after the joseki.

The joseki I'm referring to (as taken from Kogo's joseki dictionary): 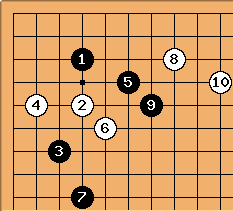 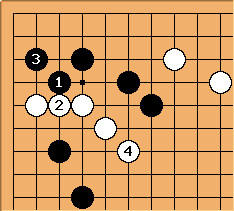 So this seems pretty fine for black who has sente, but I'm worried about finding a good answer to

in the next diagram: (I am aware that white shouldn't play this straight away, but still looks a good move) 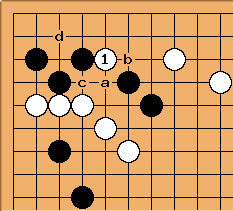 the a, b, c sequence is the only thing I can think of, so it seems that white has gained points and a base for his group in sente.

Is there a better way of handling this

stone ? or is that just a drawback of this joseki that I should learn to play around ? Thank you all !

tapir: Are you sure this is joseki (I meant diagram 1 and 2)? Jumping out further (limiting the weak White group) seems urgent to me. That is you want to play at

(2nd diagram) or near there with Black.

Dieter: no pro game has it. It's just Kogo.

tapir: The references are a bit messy here, what is "it". Diagram 1 was surely played at times, for diagram 2 I have no examples in MasterGo. Having no examples of diagram 2 in the database, surely nobody plays any of the proposed continuations, but that is not because of the continuations but because the whole idea behind diagram 2 is dubios.

Atulab: this clearly isn't urgent, but it still seems a little bit too good for white. I'm just trying to understand what happens in the corner after the white group in the middle in safe enough that white can come back to this move

tapir: Can you please say what is clearly not urgent. Playing two moves in the corner without addressing Blacks main weakness doesn't look good to me.

Atulab: sorry tapir, I had actually misunderstood your 1st remark. Regarding playing

in the 2nd diagram at

, it seems that white would then simply live in the corner, like in the other josekis. So I think that black needs to take the corner for himself before he can have any sort of attack on white (which explains the joseki sequence in the first 2 diagrams). After the joseki, black should try to attack the

group. My question was actually regarding

(in the 3rd diagram) in a later point in the game (that is the move I was referring to as "not urgent"). I want to understand if this sequence

, ba, wb, bc, is really good for white or if there is something subtle I don't see.

tapir: On a second look, after Black connects, can't White play a placement at d reducing Black to one eye? 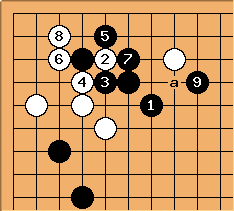 fractic: I thought this was the joseki. Allthough I think that

at a is more common nowadays.

tapir: I always wonder when sth. is called joseki by books or professionals but you have rarely any example at all in your database. (I have exactly three and only one with

.) I mean Black captured a stone but still has no real eyes, while White has a very stable corner with some territory, despite being the one who approached the corner. Can it be that professionals wrote "joseki" in the dictionaries but rather didn't really consider it one in their own practice?

fractic: I'm not sure when exactly professionals call something joseki or not. But I got the idea that this is an old or even decrepated joseki replaced by the newer attach variations. I agree that the variation is not very good for black since the white stone on the top has a lot of aji. However he still managed to develop on two sides so I would not call this a bad result for black. I personally prefer the mordern variation for Black but it's not without its drawbacks. White gets a bit more profit in the new variation.

Dieter: in a gobase search, this turns up as an old pattern, played by at least Ishida Yoshio and Maeda Nobuaki. So, it has been at some point good enough for a few pros. I think we should detach from "joseki" as an eternally balanced pattern. This is clearly not joseki in that sense but it still is a good reference point, because Ishida and Maeda played it. 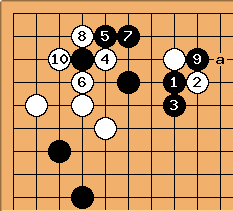 Tapir: This is one joseki I know. But you can't force your opponent to play along, if he has sth. else in mind.

fractic: Yes this is one of the more modern variations I had in mind. Playing

underneath is also a later development in this joseki.