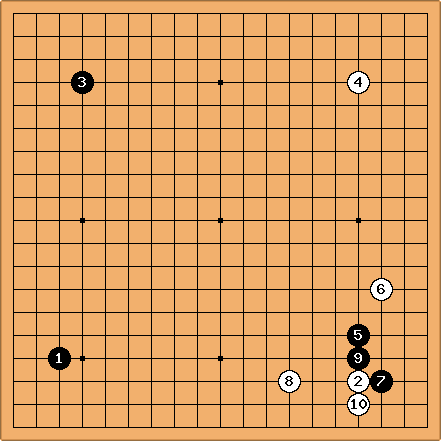 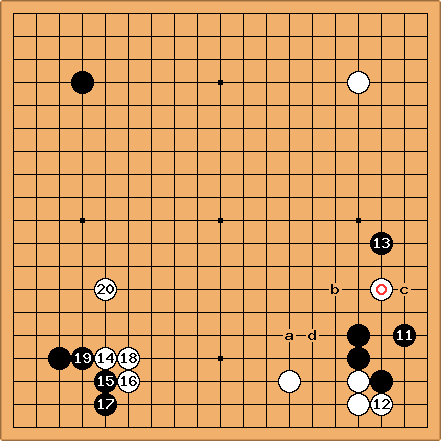 Tapir: I would like to learn your opinion on this opening so far. Esp. the choice of

(I played White). In reviewing this game I was troubled how conveniently Black spoiled White's ambitions with a play at a, while at the same time weakening

eyeing at a running battle between

and the Black lower right corner w/o outright encouraging Black to take it with a move at a - maybe that would have been the better choice - give'n'take instead of wanting too much. What do you say? To e.g.

at a, Black likely has to attach on

, then approach the upper left corner. 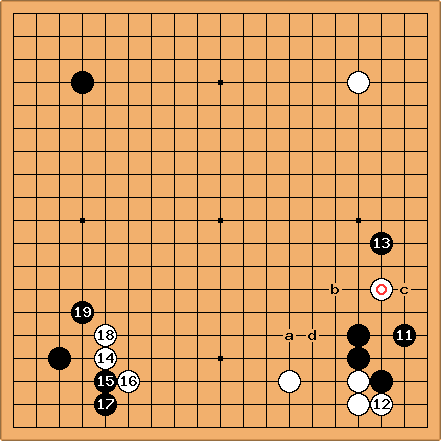 Something no one else pointed out is that

above is not joseki. This exchange here is considered standard, even though it is rarely played by amateurs.

is fine, IMO, but the two space jump along the right side would have been fine too.

looks like a mistake to me. The bottom side is relatively uninteresting due to the low strong white group in the bottom right. White should play the avalanche to develop the upper side. White's 4-4 stone in the upper right is good for the ladders that may crop up in the avalanche. Also, instead of

, I would like to play b to see how black responds. At that time,

are still light, and can be sacrificed. If black responds at c, white can exchange

and then develop a moyo with a move at d. If black decides to fight with d, white can counterattack against

, since the bottom right white group is strong and the bottom left is light, so no trouble there.

has lost a lot of its bite. I think white fell a step behind here.

is sort of Joseki, see 3-4 point, high approach, one-space low pincer, 3-3 attachment, although I am not happy how in turned out. Using

to start an avalanche... (as Herman explicitly, and Bob implicitly suggest) I really don't know, what I do with my "snow capping" on blacks corner stones, when he chooses a peaceful variation. The corner in the top left is Black after all. See below. 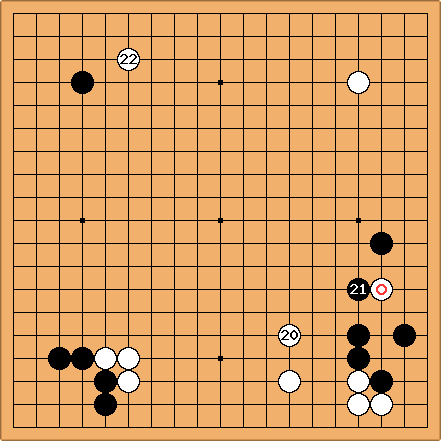 Bob McGuigan: It isn't much help in solving the problem of how White should play now, but isn't there a problem with how White played in the lower left corner in the previous disgram? The lower side is open at the edge for White so it is not so good as the basis for a moyo. White's position in the lower right is low, also not great for developing a moyo efficiently. 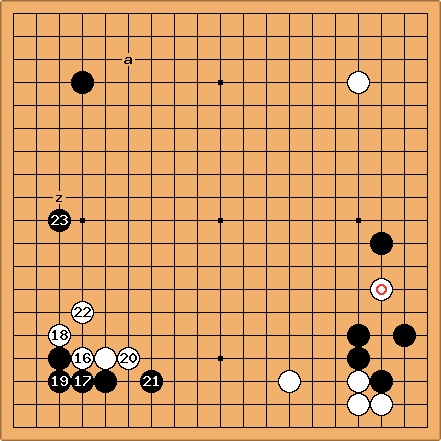 Herman: This is fine, IMO, though white can also choose to play

. The purpose of white's moves here is to prevent black from building a moyo, not to build one himself. Next, white has sente to play a, and it looks like a reasonable game for both sides to me.

, how about holding back one space to z to give a little more respect to white's thickness below?

Herman: That is certainly also an option. In that case white may have to rethink his strategy in the upper left and simply play the upper side hoshi instead of the approach.

Tapir: The following is a professional game, interestingly White is aiming for the running fight much more directly, not by a group that blocks the escape route, but by arranging that Black will have two weakened groups. 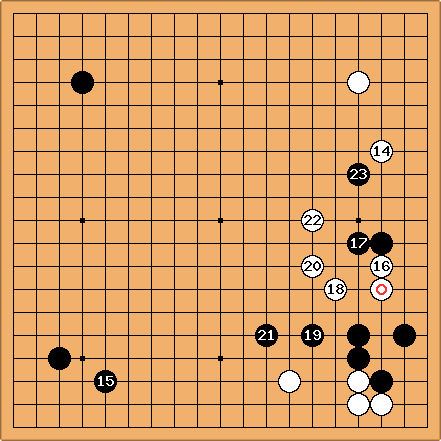 Dave: Yamada is a fighter, hence his nickname "Boom Boom". Personally I think the natural continuation for the original joseki when the top right is White would be to just extend with 12... 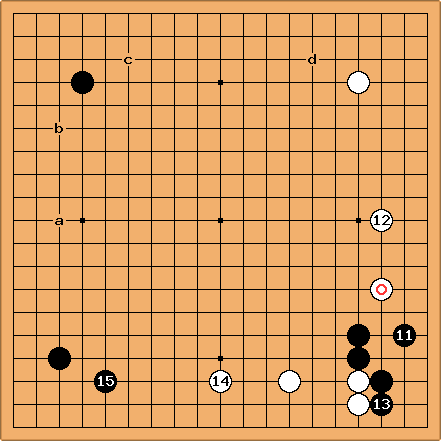 Black gets to enclose the bottom left, but then White decides how the game should proceed from a whole variety of choices.

Tapir: Yes, this looks fine as well. (Though I hate it when my opponent is solidly settled right from start.) In the Yamada Kimio game I found

interesting, i.e. when he takes the base in the corner, he is not continuing with some faraway moves but asks Black immediately whether they are going to run. The

in the corner ends in a much more meaningful position then.