Does the 3-3 invasion under this unconventional 4-4 enclosure lead to ko, or can black kill unconditionally?

I believe that W can live or escape unconditionally. The strongest threats to W would seem to be at a, b, and c. None of those lines seem to lead to an unconditional kill, or even a ko to kill.

tapir: As always all comments without warranty. I don't see how White is going to live unconditionally in the corner after b. However White does not need to live there. 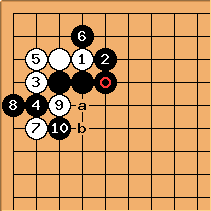 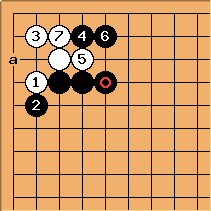 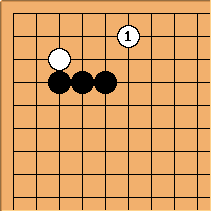 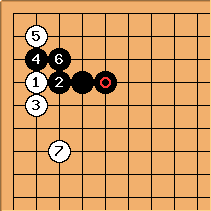 , then Black connects at

. White is running with no base. Better to probe at

or a without the

performing any useful function? The triangle is empty. W has 'c' to look forward to later as well. This is an inverted move order for

still feels awkwardly placed here. Defect at 'a' prevents B from attacking

Question has been raised: what about probing at a or b before the 3-3 invasion? How does that play out?

Herman: The standard idea after

, after which there are several options.

Herman: With moves like this, black can reduce white to only one (potential) eye in the corner, but white has escaped, so black should have a clear plan to continue the attack.

Herman: blocking on this side allows life, because

. Black should of course keep

-- For completion's sake, another path to life.

is required, otherwise White will play there. The

makes life, because a is still sente for white.

-- thanks for this, I missed that obvious move.

is a vital point, but the exchange of

allows life again. (The atari at a is pointless, black will sacrifice and squeeze for oshitsubushi.)