bugcat: This sequence appeared in my (4k vs 4k) game just now. (I was White).

The OGS bot (a type of KataGo) evaluated it as essentially even. However, we were deep into the middlegame when it occurred, and so there were contextual factors. The value of sente was, I think, significantly bigger than in the opening.

In addition, this was the lowest strength level of OGS bot, for non-supporters.

Note that unkx80 said that there was no way that

could achieve a good result after 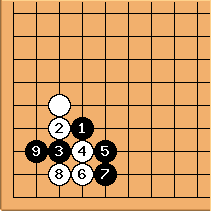 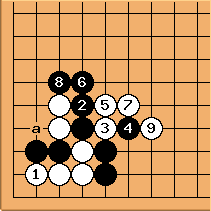 was apparently a mistake, although not a big one. It lost a couple of points. The stone could otherwise have been played at

itself, I was more worried about it appearing at

, beginning a fight. The bot judges this also to have been only a small mistake, of one or two points.

The choice between playing

as in the game or as a defence at a seems to me to be very contextual, depending heavily on whether White feels his position to be in good shape to support the fight that will follow, now that Black will surely take 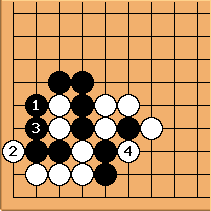 There seem to have been two key points in the sequence.

The first is the choice of where to play

in the second diagram.

The second is the one already mentioned, the issue of where to play

in the second diagram.

In both cases, I think that the decision depends on the wider context in the centre and on the adjoining sides. The dry a is the didactic and reliable move, but that doesn't mean that it's always the best. 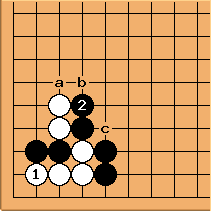 Comparison to the small avalanche

We have to remember, though, that the left hand sequence started with White having occupation of the corner, and the right hand one started with Black having it. If we accept the proverb that the first stone in a corner is worth five points, Black could then be seen to have lost at least five points if the sequence occurred in an early opening position.

Since Black's shape looks worse on the left, having less height than the black structure on the right, it does seem that the sequence is dubious for Black. However, it's not a collapse, and -- as said -- the bot didn't score it badly.

Dieter: A couple of points is actually quite a lot in a local situation. 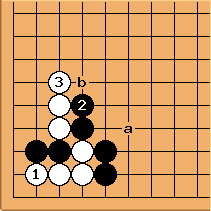 White has 12 points here and a solid position towards the left. Black merely has some influence. If he takes sente now, these are disposable stones. SO probably a will follow.

The game sequence is a big improvement for Black to this situation.