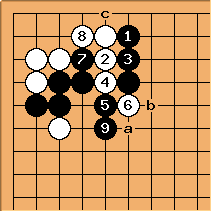 "Dia. 2. Instead of letting White run out along the upper side as in the last diagram, sometimes Black can play 1 and pen White up in the corner. This is suitable mainly when Black already has a stone somewhere around the middle of the upper side, and can hope for territory between it and the wall he builds. The drawback of this idea is that even though White's corner is not alive after Black 9, White can sometimes fight by playing 'a' or 'b' threatening to capture one of the two black groups he has cut apart."

Could someone elaborate on White being dead in the corner please

Bill: As I recall,

is aji keshi. Without that exchange, the hane at c kills. 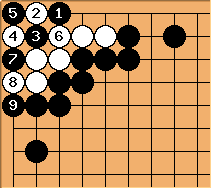 Reuven: It'd be better if you just showed it as a tsumego, perhaps... It's not dead nor clearly killable and depending on envirment maybe. But this is basically a ko B needs to win twice to capture. At the moment there isn't anything useful there but in time, perhaps Kyu Exercise 126 solution might give some hints.

JFR: That's how I read it too. Would you agree that when the book says: "The drawback of this idea is that even though White's corner is not alive after Black 9..." it is misleading or perhaps a typo?

JFR: Also after black 9, it's White to play (from the original diag.)... What should white do?

JFR: It is a strange ko, definitely "depending on environment" for which side would benefit from this exchange. 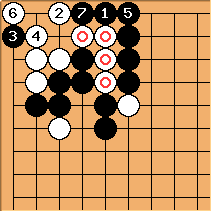 unkx80: I would put this in another way. When Black plays

, White can live unconditionally, but at the expense of throwing away the

stones. However, I don't think White wants to give up these stones since they are key stones that are used in cutting Black's group into two. 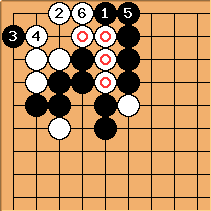 JFR: RE:unkx80's diagram: And this is a bad ko for white. 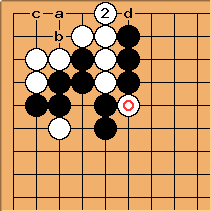 JFR: The book continues: "Dia 3: Or White can just play 2 to live, leaving Black to deal with the cutting stone @ as best he can. 2 is an interesting move; on the one hand, Black can reduce White's corner to seke in sente, starting with Black 'a', White 'b', Black 'c', but then White can push out at 'd'. On the other hand, Black can play 'd' in sente, but then White 'a' and gets the maxium possible amount of corner territory."

unkx80: Your question is related or almost the same as several standard shapes: tripod group, tripod group with extra leg, L group, L+1 group, and L+2 group. I suggest you consult those pages as well.