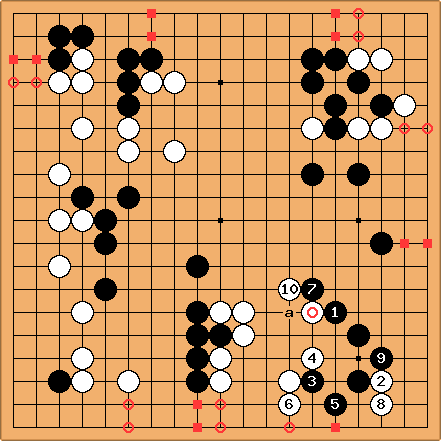 here was really surprising to me, and I don't understand it. In the following fight, while I see some meaning in those moves I like to explore the hidden variations that escape me.

, move 54. Move 54 limits Black's development on the right side and helps the white group on the bottom. Imagine a black play in this area before move 54, perhaps at a which develops the right side for Black....mind the openness of the side to the white stones in the upper right is bothersome. Might be good to consider the prospective territories at this point. White 68 (left side 44, top right 12, bottom 12) vs Black 63 (top left 10, top 10, bottom right 28, left center 15)...this count must be off. Adding komi makes it more than 10 points difference. Does not answer your question, but estimating possible territory is a good way to start inquiring about direction of play questions.

tapir: Positional judgement is not my strongest skill, but after the peep and the white connection the side isn't closed at all.

tapir: Well, touching the opposing stone with a kosumi don't occur to me since I started reading pages about shape on SL :) Btw. in the game Black split the left side, the white stones in the lower right corner (here still unsettled) will be alive.

Velobici: Touching strong stones is okay. Its touching weak stones that should be avoided...perhaps the reason is that play alternates, so one's great advantage is at the beginning of a sequence when the difference in number of stones involved is greatest. As stones are added, one at a time by each player, the ratio approaches 1:1. So, unless you are killing the stone immediately, best not to touch a weak stone because in touching one loses the advantage. Agreed that the lower right is unsettled at this time and that white does live there in the end. Black also breaks up the left side compared to the current configuration. One has to make some assumptions in estimating the score during a game. The assumptions should be reasonable and applied equally to both sides. 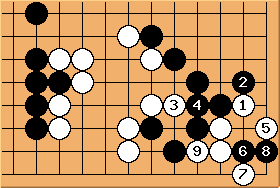 unkx80: I may be stating the obvious, but White leaves behind two stones in the corner that can live later on. See Tripod Group. 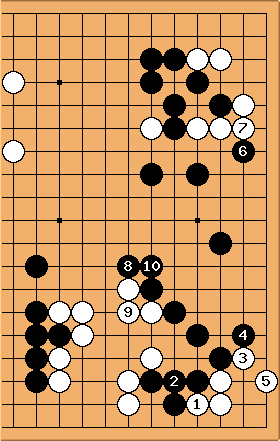 Velobici: This is the sequence from the game, after

and keeping sente is larger than killing the corner (about 20 points) and losing sente? 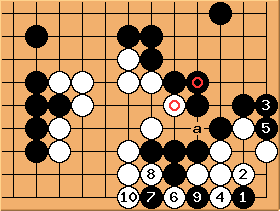 unkx80: A quick partial answer to your question. Firstly, for the standard tripod group with extra leg, Black can only kill by a ko. Secondly, later in the game White makes the

exchange, this ensures unconditional life (as proven in the diagram sequence). I haven't checked what happens when

is played without the

exchange though, but probably White at 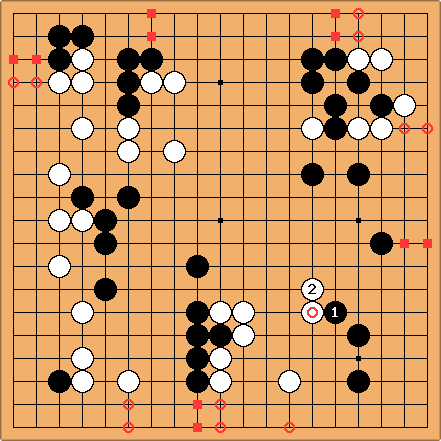 ? (Since this is the first move which comes to my mind.)