Whilst playing a game today, I thought I had the corner sealed up. But then my opponent played the marked stone and, after losing the corner, I resigned. What should I have done? 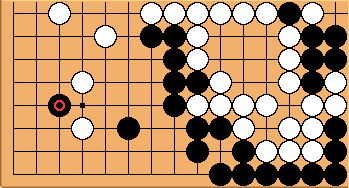 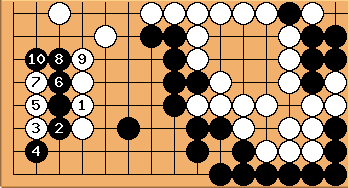 I was worried that Black would sneak through and connect up with the big wall to the right, so I tried to block this. Obviously, this was a losing strategy. He became really strong and I was split up (and surrounded on the left).

HolIgor: Prior to reading any variations I'd like to say that with the strong support from the outside I'd expect Black to live in the corner. So, my first concern would be to find how to limit him there while keeping sente. Then, having that basic variation I'd start to read out a possible kill. 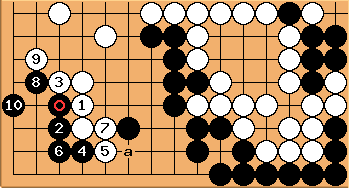 Just minimizing the damage, White presses Black down. Black gets six points in the corner in gote. Playing at a is another gote move, worth eight points deiri counting. 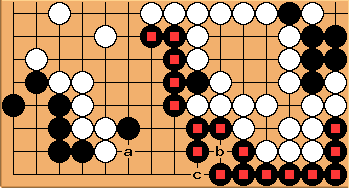 tderz: Perhaps that's the lesson of the whole problem:
always (try to) take the relative strength relations into consideration.
Before Black was strong on the outside and could invade easily.
Now he destroyed the points in the corner, but his 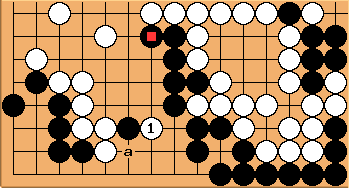 tderz: What does the clamp at 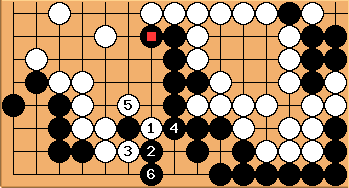 tderz: ... not much (Black lives), perhaps one has to start in a different order. 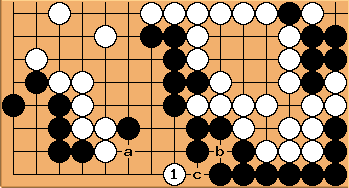 threatens the whole right bunch with only 2 liberties (b, c). 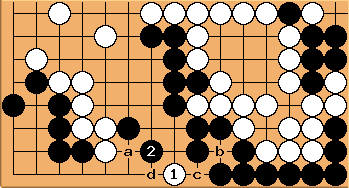 tderz: the problem is that black a threatens to connect with the corner and White seems to have no sente threat against the corner which also would disturb the connection.
White c destroys the black eye b but disables the white connection d (because the black capture of 3 stones means an eye). 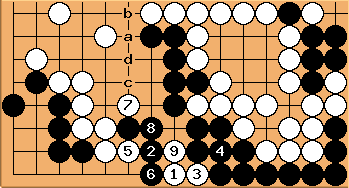 Perhaps flawed, but
at least one has s.th. to aim for.

Black would be dead if black a had not to be answered by White b (but c or d).
If White b is necessary, Black is alive (Black c). 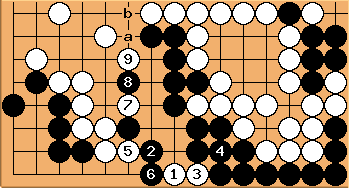 tderz: Black does not have to connect/capture immedeately and could play 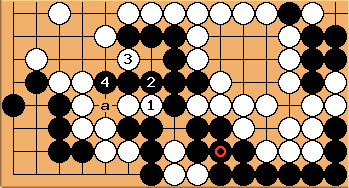 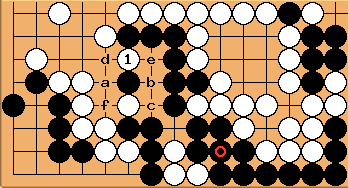 directly then ?
Looks like a big miai-spagetthi - is Black dead? 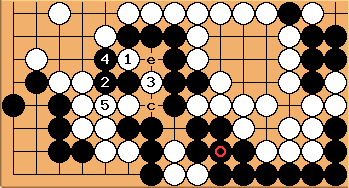 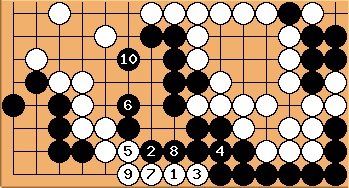 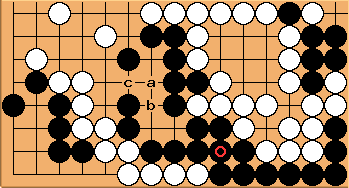 tderz: White a can be answered by Black b, Wc, by Ba etc. => Black is alive (in this sequence).
All these variations are only possible because the

-group had taken deliberately many, many liberties from herself. 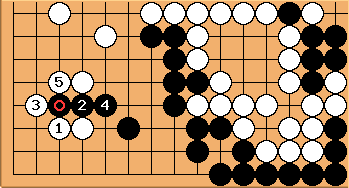 Some points but gote. 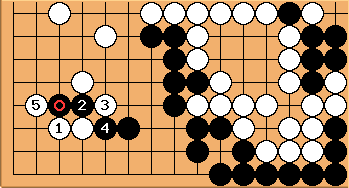 White gets the stones in gote. So Black cannot cut with 4. 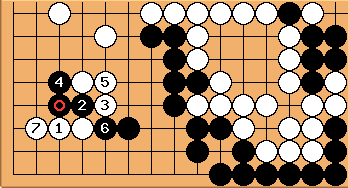 sure give white an easy time.

is a good idea. At least I can't achieve anything with black after that if White plays well.

Jasonred In my humble opinion, (and don't take my advice for granted), the whole problem starts from the misconception of "I thought I had the corner sealed up". Problem is, even without that black wall and stone in the middle of the battle, a 3-3 invasion can often result in the invader gaining a corner, while the defender gains a wall.

From this position, I would immediately go for trying to limit the damage done, possibly try disrupting my opponent's position on the bottom middle a little, and count myself lucky having succeeded at that. From the final variation "can white survive in the corner in sente", I see Black connecting to the wall and taking a chunk of the corner, probably most of the bottom... I think that the reason why the original player got such a bad outcome was that he was too ambitious, he tried to stop Black connecting, and keeping the corner.

[1] That's an optical illusion. The right edge of the diagram is not the edge of the board. Interesting thought, though. ;-)

(tderz) Must have been the late time of my posting. I thought that is some kind of weird small boards (15x15). Did I not think? (was that stupid?). Last I had an interesting discussion about whether it would be possible at all "not-to-think" (resp. to "not-think"). Buddhism, Zen etc. (without-thinking, Not-thinking is the effort to blank the mind and empty it of all awareness) perhaps (?) in the sense of "The Flow" of Mihaly Csikszentmihalyi.
At least I had fun and was intrigued by the position.