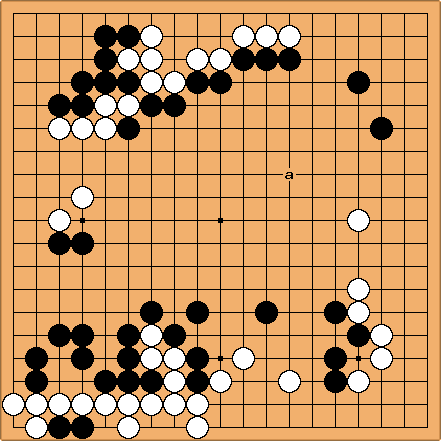 Fernobob: I was in this position playing as black and noted that while I had fairly little territory, I had a lot of influence over the centre. I'm lead to believe that it's far better to put use influence to attack weak groups than to attempt to turn it into territory but there didn't seem to be any weak groups on the board. In the end, after a nice reduction at the top I went at a but feel that I could have put my influence to better use. Could I have? 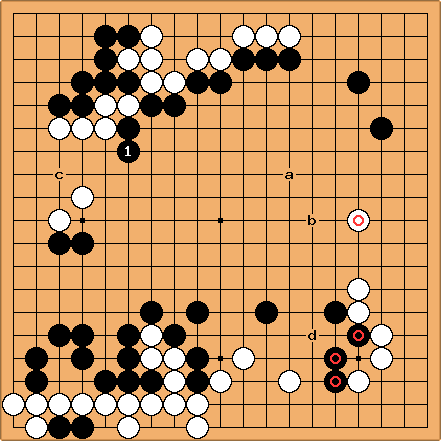 unkx80: While a is not a bad proposal, it does not put any pressure on any of the White groups. If I am to play in that direction, I will play at b to put pressure on

However, White does have a relatively weak group on the left side, and the Black group at the top has many cutting points, so I will choose to play at

to strengthen it. After

, I feel that White has no really good way of defending against the invasion at c? In any case, it seems that Black can easily seal the White group in to form a large framework.

By the way, be prepared to sacrifice the

stones if White plays at d. One possible answer is simply to play elsewhere.

Fernobob: Thanks; Supposing there were actually no weak groups at all and my groups didn't have those cutting points, ho would I use influence to make territory in the long run?