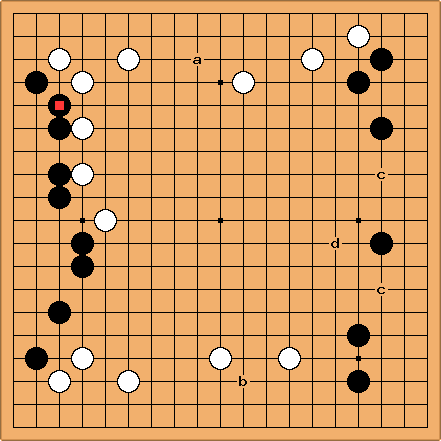 Imagist: This board position is from a professional game that I have been studying (memorizing). I have been going through the entire game slowly move by move, trying to understand the importance of each move thoroughly. The marked move is

, which despite my best efforts, I can't understand at all. I understand that it is honte to protect black's territory, and indeed that territory ends up being black's largest territory at the end of the game, and also that it slightly weakens black's thickness, but there are other moves that seem much more urgent to me, namely the invasions at a or b, (which black does later), something to diffuse white's massive center influence, or even a protection of one of the c points (which white invades later). Black did end up losing the game, so it is likely that he made some high-level mistakes, but this seems too low-level to not have some meaning that I'm not seeing. Is this move as slow and small as it seems, or does it have some greater purpose?

AJP My guess: The moves marked c are out -- they exert no pressure on white and look overconcentrated to me as well. d looks better, but is still kind of diffuse, particularly since black can't really get much of a center moyo with the strong high white positions top and bottom, and white can still invade the bottom right. The invasions of a and b look pretty good to me, but there are two of them, and white can't protect against both. This makes them miai and so there is no pressing need to play either of them yet. Accordingly, black makes the honte move of

, which protects black and pressures white at the same time.

Blake: I'm only 12 kyu, so take this with a grain of salt, but I think Black wanted to prevent White from having this forcing sequence: 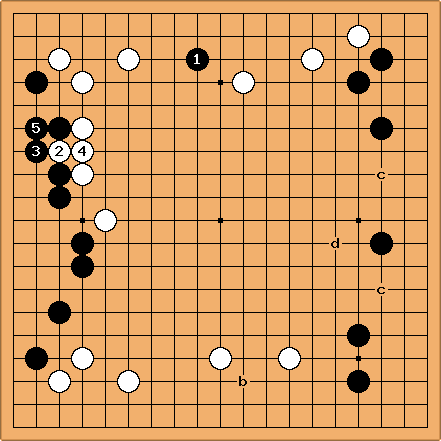 I'm sure a stronger player will now step in pointing out how I'm hideously wrong. :)

makes white thinner and helps the invasion. But still I am not sure why it can be the biggest play on the board. I added d to the original diagram, hust to point out another big move. 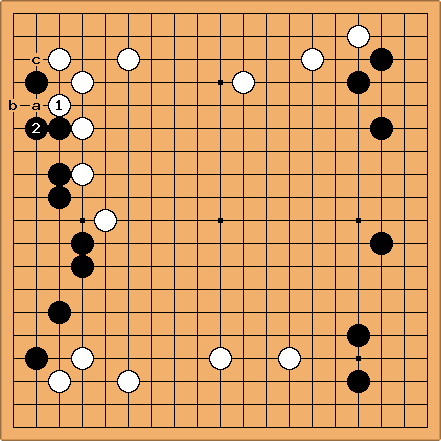 Locally, the exchange of

is sente and large. Later, White can look forward to taking the corner by White a to c. 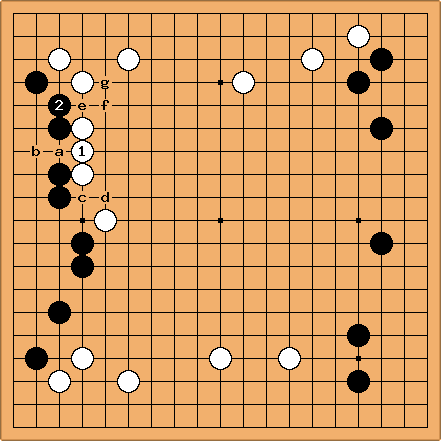 If White really must connect, then White should simply play

, and not exchange White a and Black b. The liberty at a is important, consider the sequence Black c to Black g.

Dave: One problem with studying professional games from the game records is that we average amateurs are unable to even imagine the issues that go into a correct assessment of the situation. The areas that look so large to us turn into nothing as the opponent invades and lives right in the middle. White starts out the top and ends up with the right, Black starts on the side and ends up in the center. It all seems natural as we lay out the stones one by one but all the professional level undercurrents actually pass us by. :-) 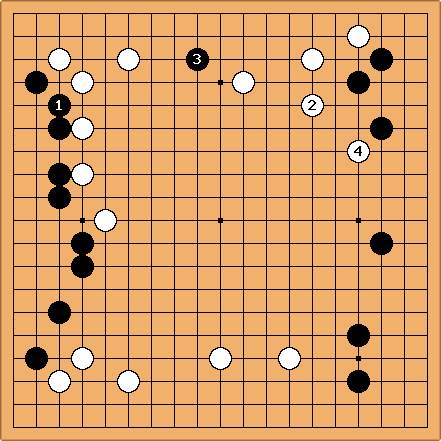 Dave: I find it interesting that while the discussion above has covered the left and various large invasion points, it has ignored the fact that White did not follow the script. After Black responded at

on the left, White played

! Where does this fit into the analysis above? Why is this the most important point on the board?

Black went ahead with the invasion at

and White responded with

. White neither invades the right nor attacks the invader at the top. Quick, everyone who expected this

So what is going on here? Does anyone know yet? If you do... raise your hand :-)