This is from a 5-stone handicap game and there is a tough semai going on at the bottom (white to move).

I tried to analyse it and think that white should win the semeai if he plays at a to increase his liberties. 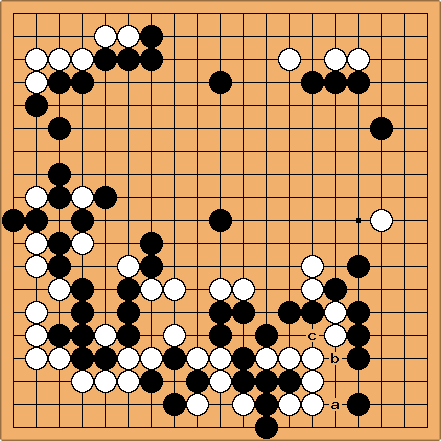 Andrew Grant: Playing a does not increase White's liberties. White had five liberties before (Black can play the b - c exchange at any time, so when counting liberties you can pretend that exchange has already happened), and there are still five afterwards. Black has seven liberties (I think; but it's too late at night and I'm too tired to work it out in my head - there's six at least) and therefore will win the semeai even if White plays first.

unkx80: Methinks White is behind by one liberty, and cannot win the capturing race.