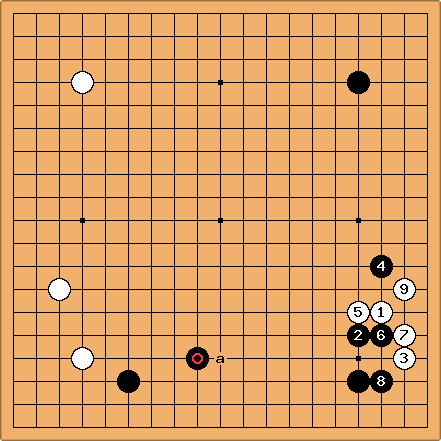 puripuri (2-4k): I happened to watch an amateur dan game played in KGS, where this sequence occurred in the early fuseki. Black used the tighter extension instead of a on the lower side... 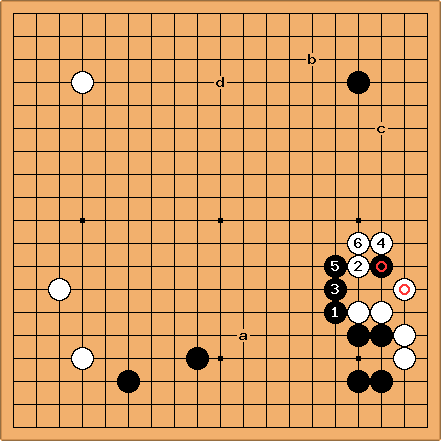 This seems more like a joseki question instead of a fuseki question, but considering the whole board result... Is there an advance for black in this result?

puripuri: Capturing the marked stone wasn't very efficient for white, in my opinion. Was the black sequence of 1-3-5 in this diagram aji keshi or a good call of a white mistake (

I presume)? In theory the tighter lower side extension should leave more space for white to roam in at the lower right, but I can't identify where exactly this should matter and where not. Is white influence up the left side a good enough trade? For reference information, the game continued with black starting a, b, c, and d. I hope the players don't mind if their game is used like this... But this is something I find too hard to figure out on my own. W eventually won this game with a margin of 10 points without komi, if it justifies something. :P

Bill: I think that Black came out slightly ahead through

stone are not exact matches for tewari, but close enough. If we subtract them, White has an empty triangle (

). OTOH, White has been forced along the fourth line, not anything to cry about. 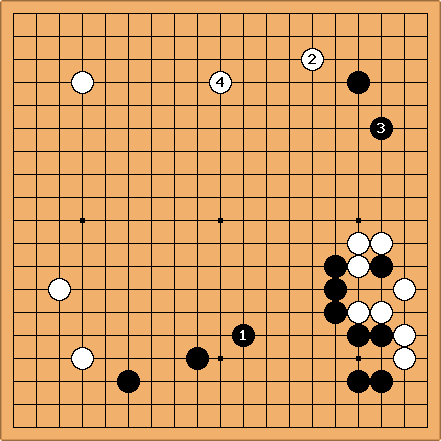 is OK, but it violates the dictum, Do not make territory from thickness. More clearly,

is not good. Because of White's thickness on the right,

has little prospect. It violates the dictum, Do not approach strong stones. A pincer would have been much better.