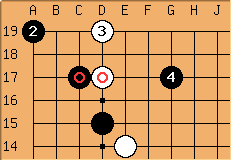 In Go, adjacency is accomplished through straight lines only.

has two adjacent empty points, namely B19 and A18,

The marked stones are adjacent, the unmarked are not.

Tapir: This looks to me like a complicated explanation for a common word that may not need one at all.

Patrick Traill: The explanation is indeed rather complicated, but the concept is useful in mathematical definitions of such concepts as (strictly) connected and go on an arbitrary graph.