A New Approach to the Creation of Go Problems

Imagist: I have been doing a lot of go problems lately. I collect these problems from various sources, mostly books, but also the internet and pamphlets handed out at go events. Go problems have helped my game a lot, but I have noticed a number of problems, most notably:

I propose the following solutions to these problems:

Richard Hunter You do not say whether the problems you have been studying are in English or Japanese. I suspect English, which has a limited offering. Problems in Japanese include most of the things you are looking for. Many players need to brush up on fundamentals (look for 基本詰碁). What you want might be more readily found under 実戦詰碁 or real game examples. I think there is value in both. Study whichever you prefer. 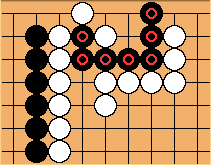 This is the old way of showing a problem. A goal is clearly stated and sente is given to black. 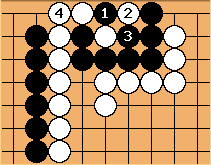 Black throws in for a connect-and-die.

This is the old way of giving a solution. One solution is given, without consideration for a wider situation. 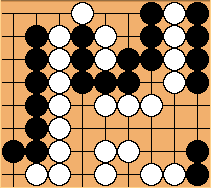 This is the proposed method of stating a problem. A complex situation is given and the solver is left to find the best play given the situation. 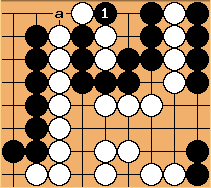 The vital point is the throw-in at 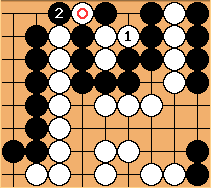 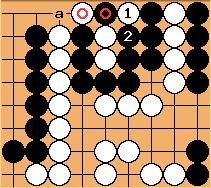 If white plays at

creates a connect-and-die. This is best play for white, as it captures a stone and saves the marked white stone for the time being (it is not in black's best interest play at a until the endgame because there are likely larger moves). Additionally, white can play at a as a ko threat to kill the black stones. 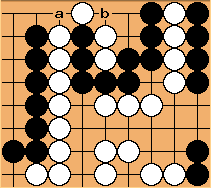 If white has sente,

at either a or b prevents the connect-and-die mentioned earlier. 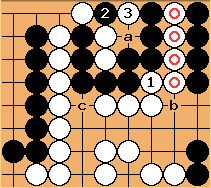 is the best move because it serves a double purpose. It kills the black group because after the sequence

, black cannot play at a because it would be self-atari.

also connects the marked stones to the main group so that black cannot use b as a ko threat later. Note that while c makes a self-atari, b still threatens white.

in this diagram, or White b in the previous diagram both leave 2 ko threats for Black in this position. The only difference would be that b in this diagram is a ko threat which may give points on the outside. As such, I'd suggest that the proposed solution should point out that the difference is in the value of the ko threats available, not the number of ko threats (that doesn't seem clear as it's stated at the moment).

This is the proposed method of giving a solution. Note that it gives variations for both black and white, and the best solution based on a larger local context. This teaches us to consider all variation and to choose our answer based on a wider way of thinking.