In this position, I often see players making the

Correct is to add a further play here straight away to prevent invasion. White at a, b or c are suitable. If White leaves the position and Black invades at d, the exchange of

is bad for White. It gave up the chance of the 3-3 point invasion, without correspondingly gaining security on the outside.

The mistake arises from a confusion between two common joseki.

The purpose of Joseki 1 is to avoid settling the shape and to leave open the possibility of invading the corner. White's position is flexible and, depending on the development of the game, she might discard the stone 1 and take compensation in the corner. Note that if White invades the corner and Black builds a wall, the white stone at 3 is ideally placed to control Black's influence.

The purpose of Joseki 2 is to settle the shape and establish a solid position.

Perhaps even more interesting is this related formation. Black 5 here is forbidden to weaker players. It leaves a weak point at a, and joseki is to play it on the third line, as above.

This shape however has been made by some of the strongest players (Go Seigen, Yi Ch'ang-ho and some most distinguished company). 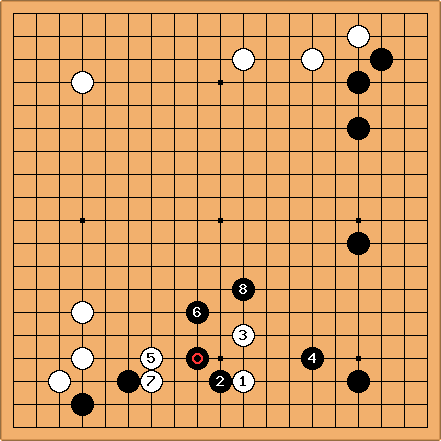 This is from a game Yi Ch'ang-ho against Cho Hun-hyeon 1991-02-19. Black's marked stone is better balance along the side, and does something to induce White

. What follows was certainly an interesting and dynamic way to activate Black's Chinese-style formation on the right side.

This may illustrate the difference between joseki thinking, and haengma thinking.