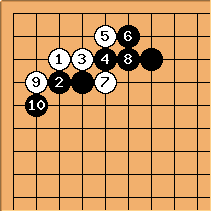 This is the main variation of White's 3-3 invasion of the enclosure.

may also be played at

Tapir: What happens after

? When black needs sente this may be better. Why isn't it mentioned at all? (Or is the inside hane preferred then?) 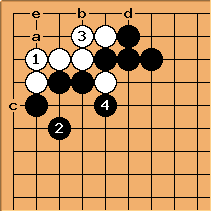 or b.
Bd is then sente, White replies with e.
No matter how White connects, there is always a Black threat from the side.

Dave: However, the threat is different (which may affect the choice of connection), see below.

This is the standard line, and White ends in sente. The White group is an L+2-group and is alive. Black though has considerable influence now. 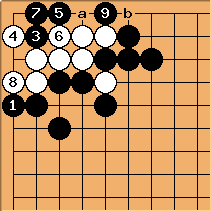 Dave: With the solid connection

here is sente. White can not live unconditionally if Black plays next at

. White is caught in dame zumari after

and can not intercept at a. If

were not on the board, White would live. Here White has no choice but to start a ko with 6 at 7. This is an indirect ko. Playing b instead of 1 does not threaten White. 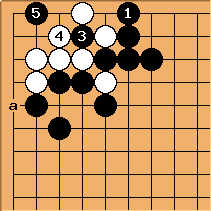 Dave: With the hanging connection, White dies outright after

. The play at a instead of 1 does not threaten White. 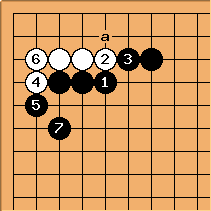 here is proper, but may be omitted: if Black wants to end in sente here it may make sense to play

in this manner, rather than follow the above main variation. 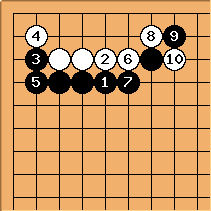 Dave: Note that this

is significantly more common than 6 in actual professional play. 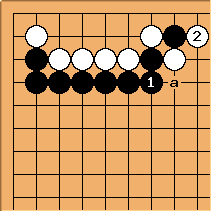 Dave: At this point Black usually plays tenuki but may force with a first.

at a reduces the corner to an L+1-group, whose status depends on sente. So Black can play a in sente ? 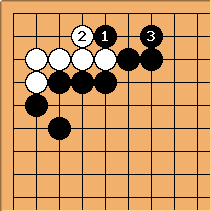 is certainly a good kikashi against the corner. And

here is a useful way to follow it up, for fighting purposes, since it still threatens the corner. It is unlikely to be the correct endgame play, though, in typical situations. 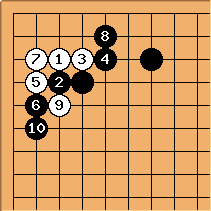 Dieter: If White inverts the order, he'll get into trouble with

. Black can answer the cut at 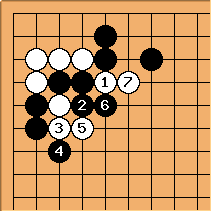 ... the fight is influenced by neighbouring stones. If Black is strong in the area, White cannot hope for much. Therefor, ... 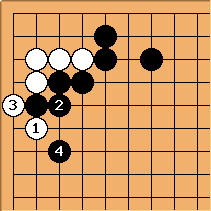 White may clamp but she'll be in dire straits anyway.

How to proceed now for white?

If Black does not return to

, then later White can clamp at a to split Black or cut at b or c.