3-5 attachment against a low corner enclosure

The attachment to a small low enclosure has the effect of strengthening the corner and getting some strength in return towards the side. This move has been played when seeking extra strength for stones below, as an expansion of a moyo below, or even as early as in the opening.

It can be found in ancient games of Shusaku as well as modern games by e.g. Gu Li. 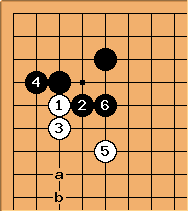 When White is seeking sabaki for her stones, she aims for

so Black frustrates these moves. Then White can extend to a or b. 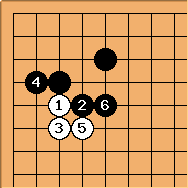 is more solid and rather aims for using these stones as strength which combines with other strength below, to form a sphere of influence. If White wants sente here, she can omit

and this is often seen in pro games. 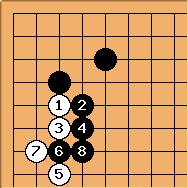 If Black is more interested in influence than in the corner, he can play 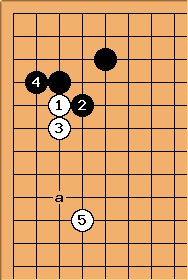 In the early opening, White may play

here or at a, so as to expand from an initial position in the lower left.