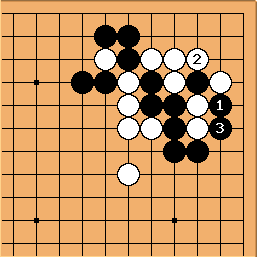 is kirikomi, a type of cutting tesuji. There is no standard English; the Japanese can be rendered literally into English as "cut into". Perhaps "cut back" is a good candidate.

In this particular case, White has no choice but to take at

. If she plays at 3 instead, a Black move at 2 would prove deadly. 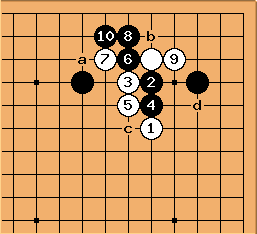 is a mistake. It should be at a, followed by Black b and White c. Black will take the corner, White the outside. White is happy. Later she has d to look forward to. 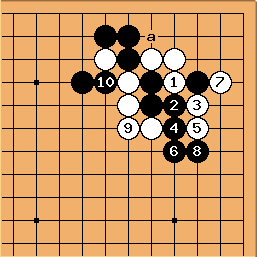 Continuing with the initial sequence, White has no choice but to push through with

, she can immediate capture with

, but then Black will give atari at 5 and cut at 9, leaving White in tatters. This diagram is marginally better for White, but after the kirikomi sequence, White will have to live at a, allowing Black to extend down the right side and leaving the White stones floating in the center.