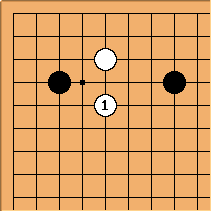 This play for White in the 3-4 point low approach two-space high pincer was hardly tried before the 1960s. White looks to settle himself; but there are variations involving a difficult fight. 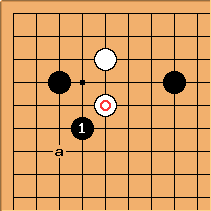 Black at 1 is now expected - the alternative is Black a. 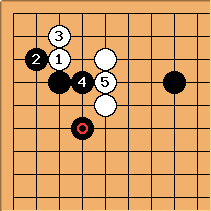 This is the set continuation. 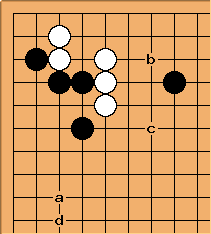 The main ideas now are Black at a, permitting White a slide on the top side, or b denying it. Also played are Black c and d. 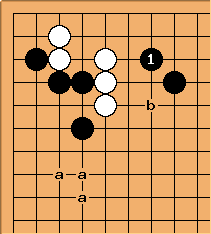 If Black 1 here, White in pro games has tried a counter-attack on the left (one of the points a), or at b to take a key point of shape. It seems there is no definitive joseki yet. 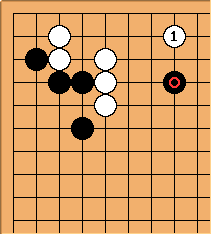 could become the biggest move despite being on the 2nd line. It is big because it is flipping the defensive/offensive properties (I would like to formulate this better) of the group. Often it could be considered an urgent move (I think there is an example in Yang Yilun's Fundamental Principles of Go).

as a kikashi stone, inducing the low

instead of a normal extension.

tderz: Good idea indeed! White is quite low and black got an additional move. It must be the specific position, which makes the difference between

Bill: Well, I'm not up with the latest on this joseki, but my references do not show

in any variation. <shrug> 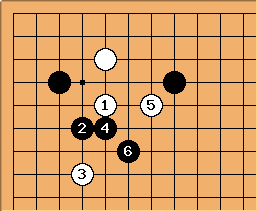 from the side is a major alternative. White wants to stop black from extending along the left. Usually white will have a position in the lower left to back this move up.

, after which there is a turning point. 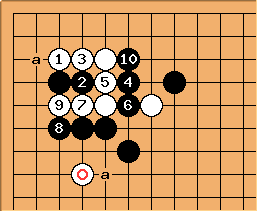 White can go to the corner with

. Black can play at a, keeping white out of the corner but allowing him to strengthen himself, but black can also build thickness with the combination of

This same joseki with

at a has also been experimented with. 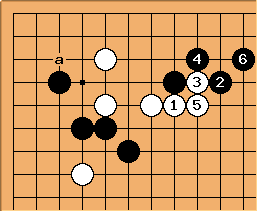 If white pushes in the center with

, black can still develop the top with

. After this, white is unlikely to attach at a right away, because the cut in the previous diagram is now too painful. 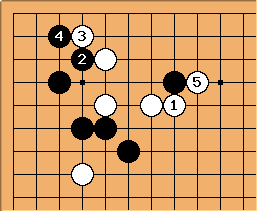 Nevertheless, black will often secure the corner fully with

, allowing white to claim the top with 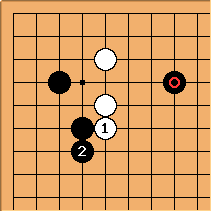 One move amateurs are prone to play which is actually bad, is pushing with

here. Even though white might be building up thickness for an attack on

, pushing black along the fourth line like this gives up too much.
Charles Matthews, Andre Engels