Well, this is what I've come up with. When white pushes out, black needs to get a little thickness first (otherwise, white can squiggle her way to freedom).

If white cuts here at

, then black must atari at

will cause big headaches for black). When white extends to

, black must extend to

. I believe black is well equipped to handle white's next step (three of which I've explored, none of which seem to work).

Warfreak2: "then black must atari at

will cause big headaches for black)". Do not automatically atari every cutting stone! Black need not atari at all, just extend, to get liberties.

See also the 123 Principle. However, either way, White can escape now with

take care of things. (Neither can white extend up at the top; because of the marked black stone, this atari-capture move is useful for black more than once.) Note that white cannot atari at a for the same reason.

At this point (or at least after he plays at a), black has enough liberties to overcome white's four in the corner.

If white goes after the stones up top, we just speed the process up a bit. 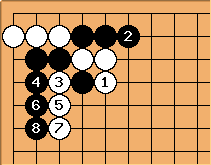 If white moves up with

, then black must be careful and extend first with

. Otherwise, white can capture those two and be safe (the atari-capture moves don't work if black omits this move). After

, black -- again -- has enough liberties to win the semeai.

I will now step aside and let others show me all my mistakes.

Arno: one mistake I found (unless I am mistaken :-) 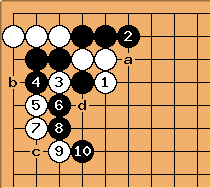 should be at 'a' to reduce White's liberties, but anyway. After the sequence to

White plays 'b' and is safe. Black cannot cut at 'c' and therefor White is safe. Also, 'd' is sente, as there is no ko threat to be found anywhere. 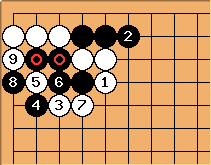 Joshual000 What about the clamp?

Black has no answer after

Again Black has no answer after

thwarts Black's plans as the

stones will get captured.

So is the stone alive?

iopq: After this the white stone is dead.

Mef: Unless I'm misreading, at the very least after

then white at 'c' should escape and live easily.

Warfreak2: Catch me if you can. 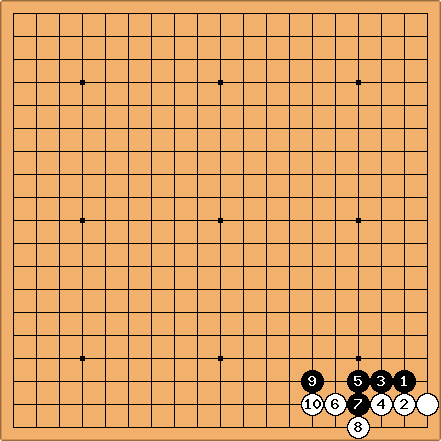 This pattern repeats, until ... 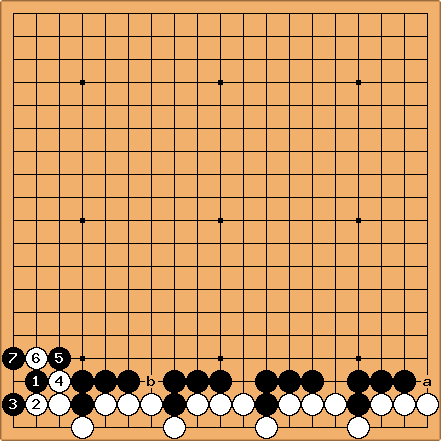 because she would make a second eye.

White has many ko threats starting with a.

Alternatively, White can push through at b or any other gap.