This may be my favorite game of the tournament so far. It's very close, with an intense ko battle and some big sacrifices on both sides. emeraldemon 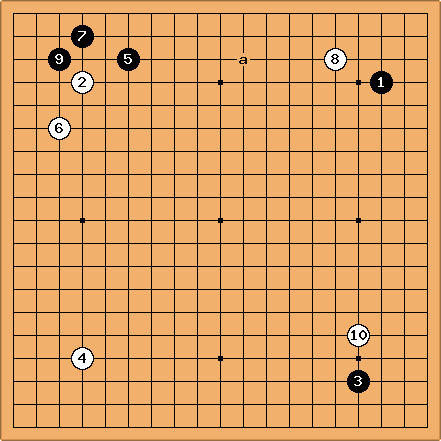 emeraldemon: Note how this game has the same opening as /Stage 1 Game 4 where Xie He was also white. Through

it's the same as the small Chinese fuseki, but

approaches instead of drawing back at a. 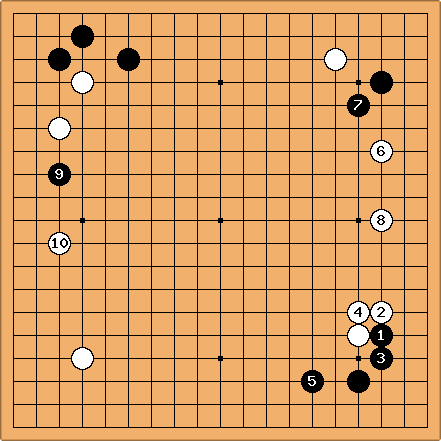 emeraldemon: This sequence also has a similar feel to Xie He's fuseki in /Stage 2 Game 1, where White starts the tsuki-hiki joseki on the bottom right, plays on the top right, then comes back to complete a framework on the right side. 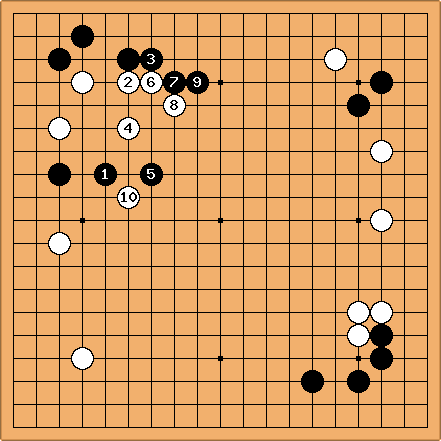 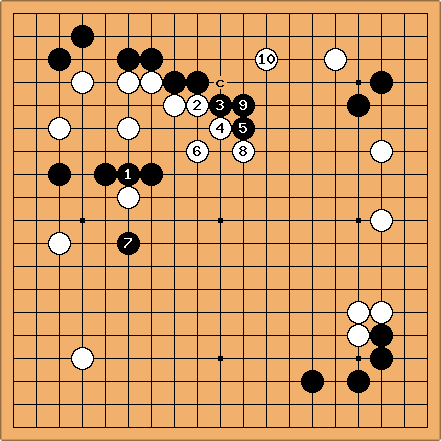 emeraldemon The double hane of

here caught my eye, and espescially

. Another way to play (which I do all the time) is like this: 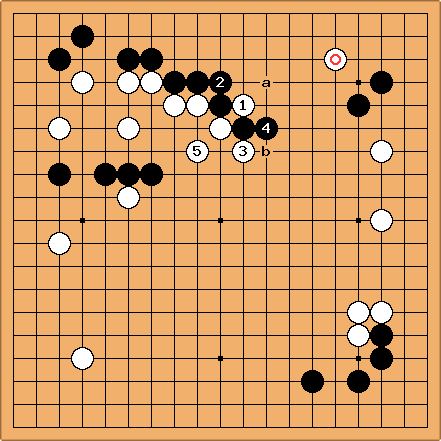 emeraldemon: My positional judgement isn't strong enough to immediately say this is worse for W than the game, but I think it leaves less aji than the game sequence, which may be why W avoided it.

tapir (1d kgs): With moves like b pretty much sente, and after a defensive move around a

really suffers and may die soon. As opposed to the game, where

eyes at the cut at c (so it became a sente move) and white settles. Now the black kosumi is weak despite all the stones black played in the area.

, the white group on top seems strong, and black is left with a few weak stones (circles). But Black makes a leaning attack against the left, presumably to strengthen the black group that still isn't quite alive on the left side. From that same principle that pros tend to leave aji as long as possible, you can generally assume every exchange is made to gain something specific. This lead me to wonder about

. I think maybe W wanted to prevent this: 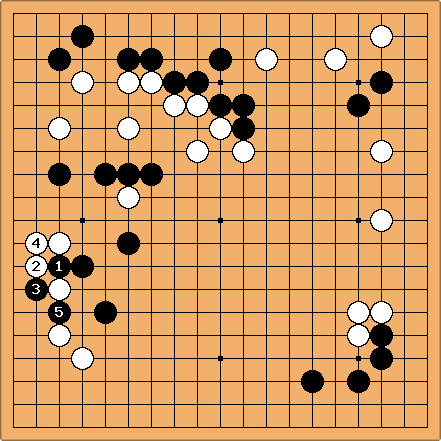 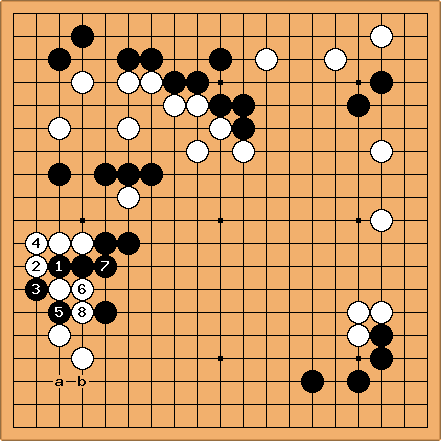 emeraldemon: I could be wrong about this though.

tapir: Imo, you are right about the direct cut, further there is the simple reason of strengthening the black stones which want to "attack" both white groups, a task impossible if they become too weak themselves. For aji, maybe thinking about some possible future exchanges like Black a, where White wants to play at b shows that there is quite a lot of aji left. (

can link up with the stone at a then) 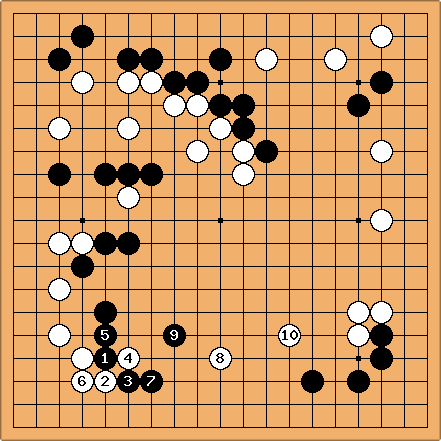 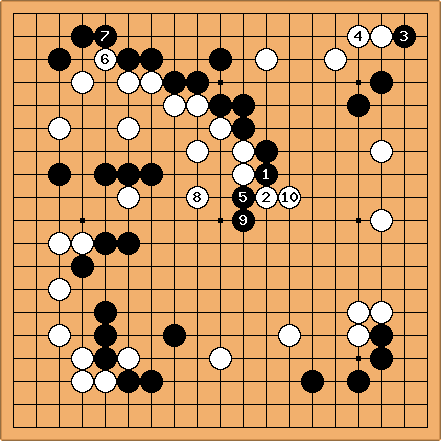 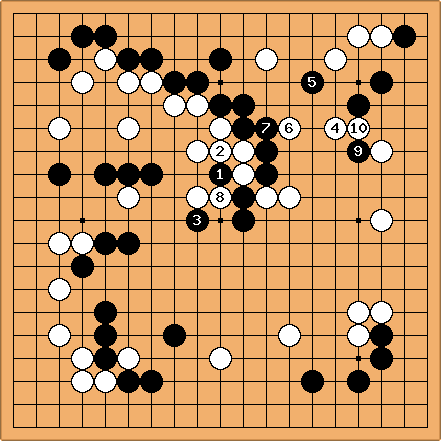 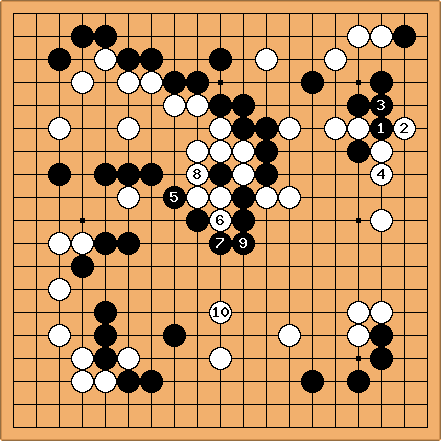 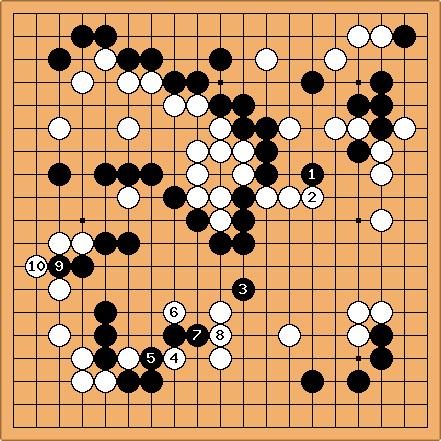 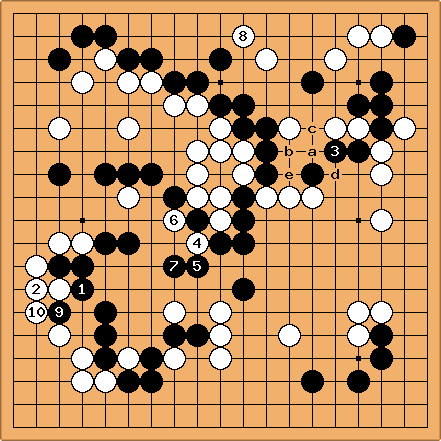 At first it looks like B103 captures the 3 black stones, but after white a , black b, through to e, black is behind in the capturing race. I think the move does have an indirect effect of preventing the cut against the stones in the upper right corner. 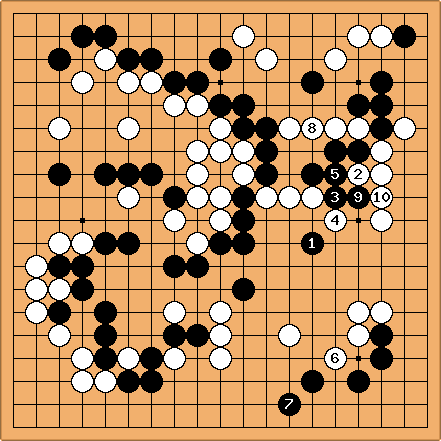 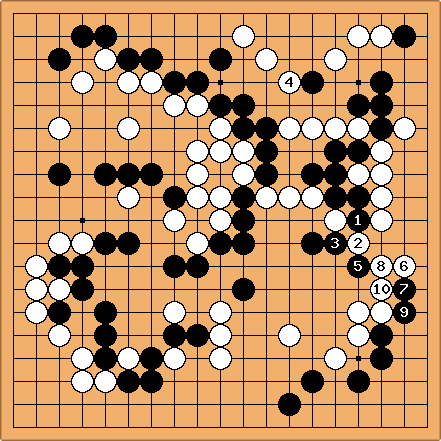 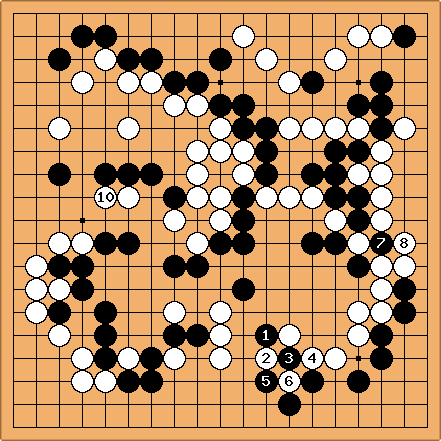 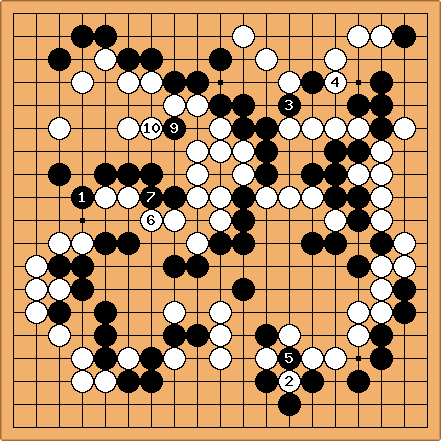 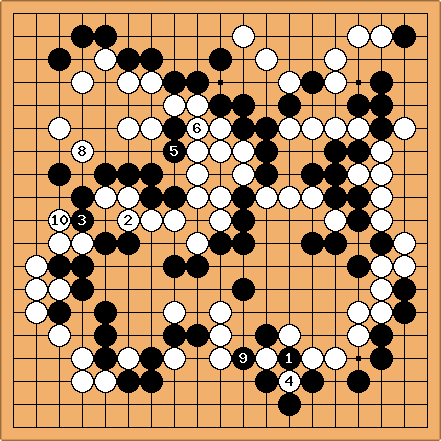 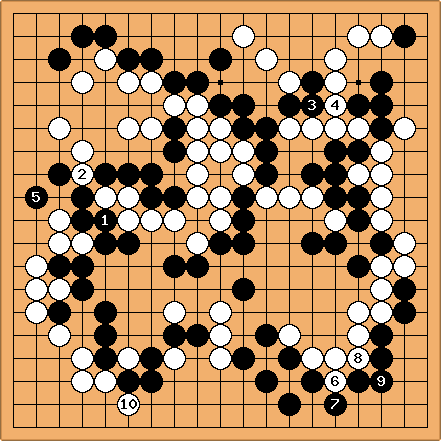 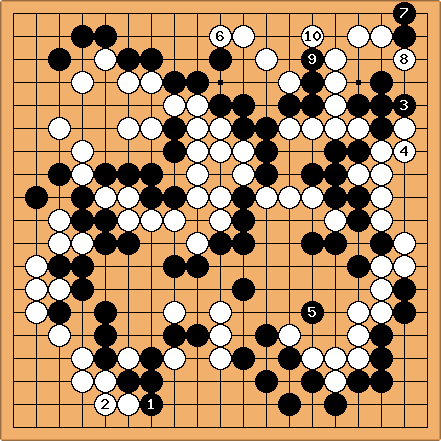 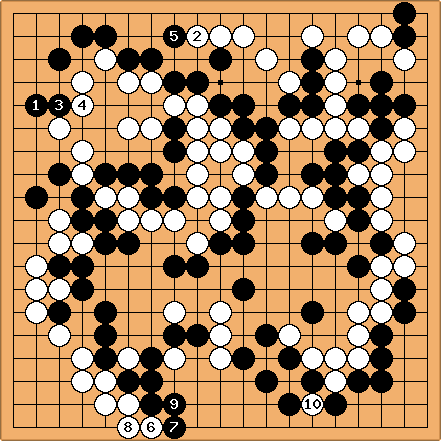 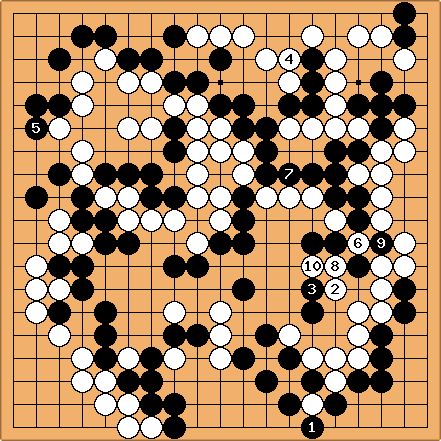 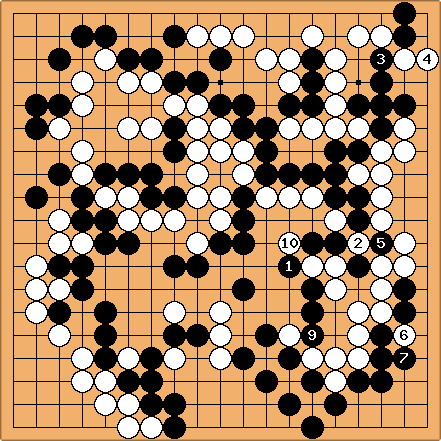 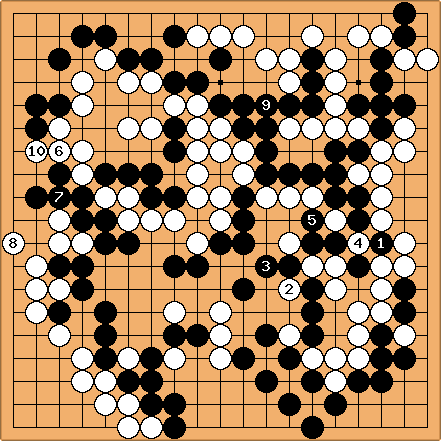 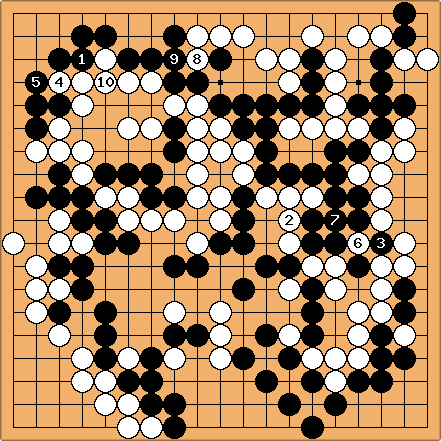 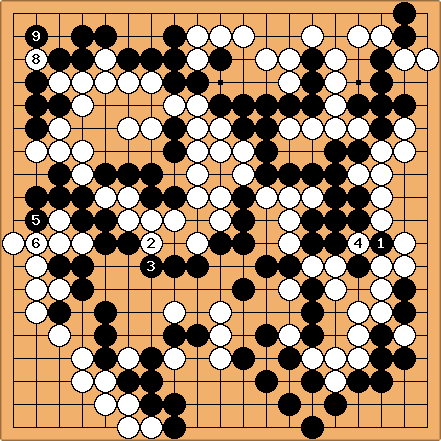 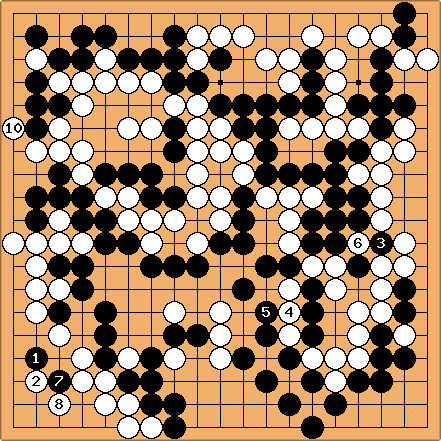 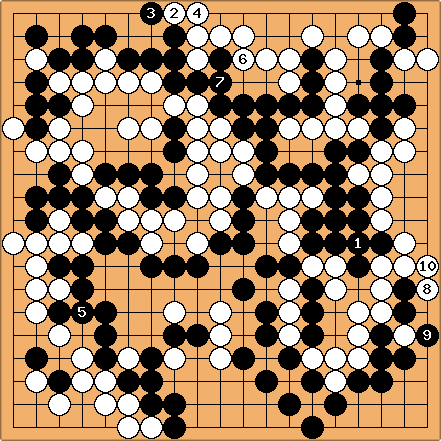 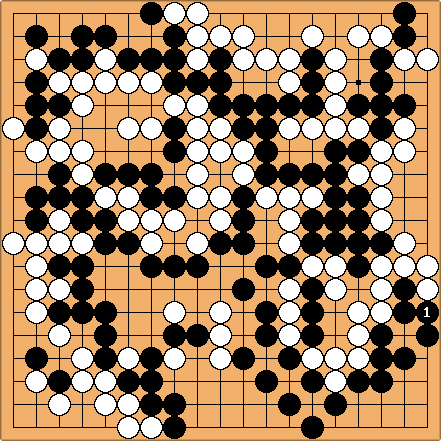 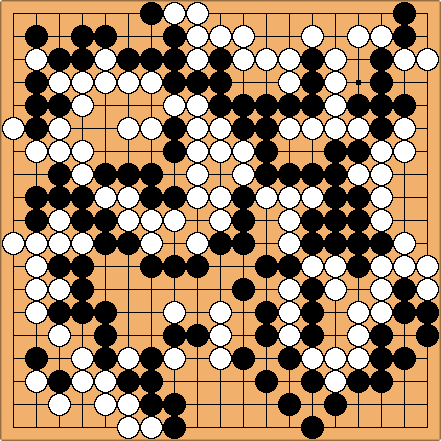 Does anyone else find it strange that white has won every game of the tournament so far? It seems the most important factor is nigiri!