In the game between Kobayashi Satoru and Rin Kaiho at:

The game is commented but one of the moves does not make much sense to me. However, they ARE 9p so I'm probably missing something but it seems very obvious to me that there was a better move.

At white move #48, he choses to play s15 which results in his group being cut. Couldn't white simply play s14 which connects his groups? Why does he not do this? I see no advantage to allowing the cut.

The reason diagrams are so easy to make here is so that people do not have to go to external sites to figure out what your are talking about. You ask the question, please do the work to express it ;-) 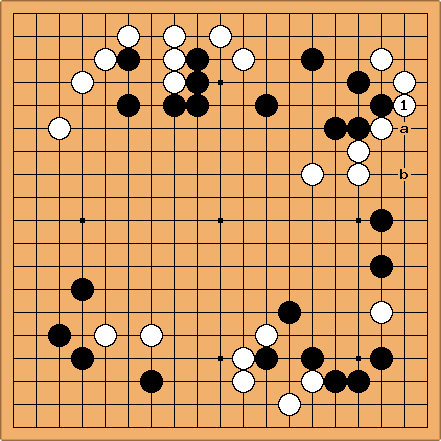 Intuitively I would say that while W will get cut, he will build strength against the B group at the bottom, while a would leave a weakness at b, perhaps? It would seem to be a nice result for B, even if white ends up safe. Seems it could get pretty complicated (I haven't looked further in the game).